Peel Acres was the affectionate name JP gave to the family home in the village of Great Finborough, near Stowmarket in Suffolk. It is an extended thatched cottage which was originally named 'Nan True's Hole', and renovated by Michael Halls in the 1960s: Matching Mole paid tribute to Nan True's Hole in a track of the same name on their 1972 album "Little Red Record".

John and wife Sheila had moved there in 1969. Sheila notes, however, that originally the name 'was simply the light-hearted title John gave to wherever he happened to be living' (he used it for his Fulham flat in his 1967-68 International Times columns, and in a 1966 column for the Kmentertainer referred to his then home in Southern California as "fabled Ravencroft Acres"), and that the first home they shared in Park Square Mews (with Beautiful Peter, otherwise known as Peter Sanders, photographer) was also known as this (Peel, J. and Ravenscroft, S., Margrave Of The Marshes, Corgi Books, 2006, p. 230-1). 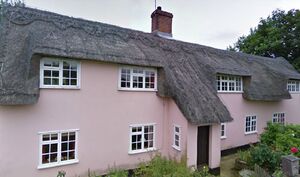 There was a basic studio facility in the house that had allowed Peel to record the shows for his overseas programmes since 1989 (e.g. BFBS, Radio Eins, Nachtexpress) as well as the occasional Radio 1 show (the first of these being broadcast on 09 June 1995). With the installation of an ISDN digital phone line in early 1999, Peel was able to broadcast live from home, typically done on a Thursday evening after he'd spent the morning and early afternoon in London recording Home Truths for BBC Radio Four. The first such fully live show went out on 03 December 1998.

The ISDN line allowed bands to play live on the shows broadcast from the house. The first to try out the facility were Tim and Charlotte from Ash, who played an acoustic set live on air on 15 April 1999.

From 2000 onwards, Peel's Christmas specials were hosted at the family home, with the exception of 2002, which was broadcast from Maida Vale due to John having to stay in London to record Home Truths for Radio 4 the following day.

On several occasions the line from the house failed and the show had to be replaced by a repeat or repeats of previously transmitted live / DJ mix sets. This occurred on 16 May 2002, 06 June 2002 and 26 August 2004. On 17 October 2002 Peel and the team stayed in London to broadcast the programme due to there being a problem with the line. Zane Lowe had to fill in for 10 minutes at the start of the show on 24 July 2003 due to problems making the connection, but the broadcast then went ahead as scheduled. On 20 November 2003 the ISDN connection was found to be out of action but Peel and production assistant Hermeet were able to relocate to the studios of BBC Radio Suffolk in Ipswich at short notice and broadcast the programme from there. It was subsequently discovered that the cable had been damaged by the highways authority who had been cleaning out the gullies in the lane [1]. Occasionally, broadcasts from the house were interrupted by a temporary loss of connection, resulting in the Radio One emergency tape kicking in (eg 30 March 2000). On 29 July 2004 trouble with the line meant that after several interruptions the planned show had to be abandoned before an hour had been completed.

Floods And Other Problems

Flooding at Peel Acres was an occasional hazard. Peel was stranded at home by floods on 01 February 1979, resulting in Paul Gambaccini stepping in to present that evening's programme. A later instance of flooding was mentioned on the show on 25 August 1987.

In the summer of 1981, Peel sliced off the top of a finger in an accident involving a lawn mower at the house [2].

On Sunday 28 May 2000 parts of the house suffered water damage when a stream that runs alongside it flooded, causing the contents of the septic tank to back up into the building [3]. Although a carpet had to be destroyed, "miraculously only one record was ruined" [4].

There was further disruption over the weekend of 27 / 28 July 2002, when a power cut left the house without electricity for a full 18 hours [5]. Fortunately the impact on the John Peel Show was minimal, although the home computer was reportedly put out of action [6].

Into 2003, heavy rain between Christmas 2002 and the New Year brought further problems with flooding which caused the Ravenscroft residence to be cut off from the nearby village for several days [7]. On the following evening's show, Peel mentions that the central heating system had broken down, painting a bleak picture of the family huddling together for warmth as a consequence [8].

On 11 November 2003, John reported that he'd spent the morning unblocking a drain at the house, an unpleasant task not improved by the gruesome discovery of a dead hedgehog in it.

Peel also alluded in his final programmes to a live set from Jawbone which was to have taken place in November.