Start a Wiki
Pentangle grew out of a series of weekly sessions held at the Horseshoe Inn, Tottenham Court Road in 1967, featuring guitarists Bert Jansch and John Renbourn accompanied by bassist Danny Thompson, drummer Terry Cox and vocalist Jacqui McShee. They expanded the guitar explorations of Jansch and Renbourn into a "folk-jazz" style, winning critical acclaim and an appreciative audience. With the aid of their aggressive manager, Jo Lustig, they made a number of successful LPs, recorded many sessions for radio and TV, performed in large concert halls and toured internationally until splitting in 1973. To the general public, they were most notable for providing the theme music to Take Three Girls, the BBC's first drama series to be broadcast in colour; Light Flight, from the LP Basket Of Light (released as a single, it narrowly missed the UK Top 40, but the album went into the top 5).

With the rise of folk-rock and heavily electric jazz-fusion in the 1970s, Pentangle's acoustically based style went out of fashion, although Jansch and Renbourn continued to issue records under their own names and collaborate with other musicians, while Danny Thompson continued to be a prolific and in-demand session player, working with the likes of John Martyn and Richard Thompson. Yet gradually their work began to be rediscovered, particularly in the 1990s with the remarkable posthumous popularity of Nick Drake, another artist who had combined folk and jazz influences (and had used Danny Thompson as a backing musician on some of his recordings). Interest in Drake's music led to renewed appreciation of his contemporaries, such as Donovan and Pentangle, whose styles were seen as a welcome change from mainstream folk-rock, which now seemed tired and clichéd. Many reissues of Pentangle's material appeared, and the band re-formed in 2008 and toured the UK. A further tour in 2011 was cut short due to Jansch's serious illness; he died in October of that year. 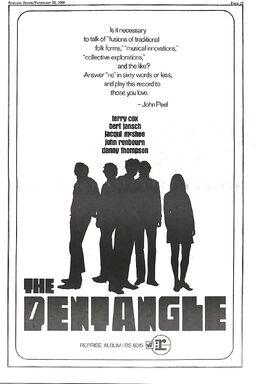 John Peel's closest connection with Pentangle was as writer of the sleevenotes to their first LP. He was later to express embarrassment at their hippyish prose style, but nonetheless the notes described how he had discovered the music of Jansch and Renbourn on his return to England, and had featured tracks by them on his Perfumed Garden show on Radio London. The final sentences, recommending that listeners "play this record to those you love", were used by Reprise Records in their advertising campaign when the LP was released in the USA (a full-page ad appeared in Rolling Stone, Nov. 23, 1968, p.28).

Pentangle were slow to record, reportedly because Jansch and Renbourn were still under solo contracts with Transatlantic Records. The group made their live debut in summer 1967, but their first LP was not released until May 1968. Their first session for Top Gear was broadcast on 18 February 1968 and included "Soho", a song by Jansch originally recorded for the LP Bert and John, which Peel had played on the Perfumed Garden. A tape of the session track has Peel saying "Thank you, nice Pentangle....may the hair on your toes never grow less", a greeting borrowed from the works of J.R.R. Tolkien, who became a cult writer in the hippy era. On the same session, they perform "Travelling Song", later issued as a single before the release of the LP; Peel comments "You may hope that the Pentangle may record in the not too distant future as I do and apparently they will be doing so..."

Three more Top Gear sessions followed in 1968 and one in 1969, but as Ken Garner puts it in The Peel Sessions (p.318), they had "Dozens more pop and folk bookings" at the BBC, including their own weekly series on Radio 1 in 1970 and a brief TV series in late 1969-early 1970. Peel continued to play their records, but they disappeared from his playlists as the 1970s progressed. Some critics felt that the later Pentangle was less than the sum of its parts, their albums being less impressive than the solo projects of Jansch and Renbourn. Peel too seemed to prefer John Renbourn, whose records were played on his shows from the Perfumed Garden era to the 1980s.

(The list below was compiled only from the database of this site and is certainly incomplete, due to the shortage of show tracklistings from the period when the band were featured most heavily by Peel. Please add more information if known.)

Retrieved from "https://peel.fandom.com/wiki/Pentangle?oldid=216003"
Community content is available under CC-BY-SA unless otherwise noted.