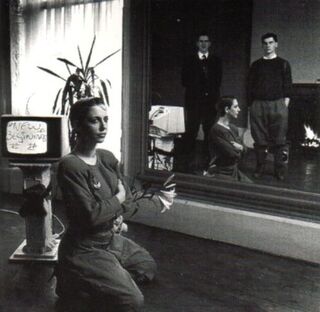 Pink Industry were a post-punk band from Liverpool formed by Jayne Casey after her previous band Pink Military split up in 1981. Her new band was more electronically oriented and contained Ambrose Reynolds (who had played with Casey in Big In Japan in the 1970s, and was an early member of Frankie Goes To Hollywood), the duo initially using several other musicians, later becoming a trio with the addition of Tadzio Jodlowski. The band's sound was described by Trouser Press as "like Siouxsie Sioux fronting Japan". The band's first release was the Forty-Five EP featuring lead track "Is This The End?", released in February 1982. The band's debut album, Low Technology, was released the following year, reaching number 12 on the UK Independent Chart. A second album, Who Told You You Were Naked, followed later the same year, and peaked at number nine on the Indie chart. Between 1982 and 1984, the band recorded four sessions for Peel. After a two-year gap since their previous release, the band returned in 1985 with the New Beginnings album. A final single was released in late 1987, the band splitting up around the same time. Casey subsequently concentrated on a television career. On January 28th 2012, Pink Industry (Jayne, Ambrose and support band) reunited for an exclusive concert in São Paulo, Brazil, in the Cine Joia venue.

Scott Sinfield of [sic] Magazine said of the band: "Pink Industry primarily recorded at Ambrose’s home, and whilst their sound was often sparse – or rather, spacious – it didn’t sound particularly lo-fi. They were clearly very adept engineers and producers of their own music....They are, for me, quite simply one of the best bands of the 1980s whose music stands up as well today as it did when it was first released." [1]

JP booked the band for four sessions and called New Thing from the second "absolutely topping." His enthusiasm was not shared by his listeners, who voted for none of the band's material in the Festive Fifty, and some of their session material is only available as a bonus CD on a limited edition Brazilian box set.

Retrieved from "https://peel.fandom.com/wiki/Pink_Industry?oldid=235173"
Community content is available under CC-BY-SA unless otherwise noted.