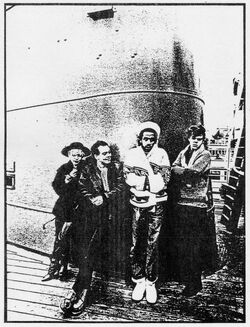 Pink Military was led by singer Jayne Casey from defunct Liverpool post-punk legends Big In Japan and originally known as Pink Military Stand Alone. Released a couple of experimental and dub-influenced EPs before an album of more conventional material that seemed to get lost in the shuffle and has still never been released on CD. Eventually morphed into the more dance-orientated Pink Industry.

After his support for Big In Japan, Peel was quick to give airtime to Jayne Casey's next project, including the first EP as Pink Military Stand Alone and two sessions, and was thanked as a friend of the group on the back of their only LP.[1] In an interview with the Mezzanine Floors website, Casey explained:

"He (Peel) was dead important because he gave independent bands some air time. He helped shape the future."[2]

The DJ would continue to play the singer's music after Pink Military became Pink Industry, who recorded four sessions.

Retrieved from "https://peel.fandom.com/wiki/Pink_Military?oldid=244579"
Community content is available under CC-BY-SA unless otherwise noted.