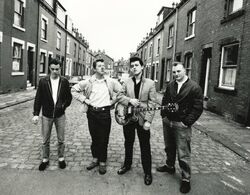 "I don't recall being on the same night as The Damned. Could have been the repeat." (Vince Berkeley, Lead Vocals, Lead Guitar, songwriter, PPS 2010: original communique to this Wiki.)

"A lad at my college was in Pink Peg Slax, who pretty much had the Gene Vincent and the Blue Caps sound off pat."(Dave Simpson, comment appended to this article.

The Pink Peg Slax are a rockabilly band from Leeds with a notably irreverent attitude to both their music and their audience. Their MySpace page notes that, to counter the Smiths' Meat Is Murder, they released Eat More Meat, and the above-named Vince once told an audience in Dusseldorf who did not appear to appreciate their music to "go away and make some chemicals." Their 1984 7 inch release 'Self-Pitying Stan' had run-out groove etchings stating "Chet (the bass player) is a lech" and "Vince is a drunk hen."

Their members were drawn from original line-ups of the Sisters Of Mercy, the Mekons and the Gang Of Four, and they boasted "100% original tunes with a deft rockabilly-cajun approach." The band recorded sessions for both Peel and Andy Kershaw, but took a 20-year break from music to "raise families and conquer the world of work." Despite their irreverent attitude, they are staunch Roman Catholics.

Vince (Mark C. Wilson) sent his own biography of the band to SIG and it is reproduced below: many thanks to him.

Pink Peg Slax were never your typical rockabilly combo. Instinctively avoiding the "rocking" club circuit and with their records properly filed in HMV and Virgin under "P", the Slax had cut their teeth in seminal punk act The Mekons and early on supported Malcolm McClaren's Bow Wow Wow. Grinning broadly while the rest of Goth Leeds scowled miserably, these Leeds University graduates wrote songs simultaneously nonsensical and literate in a musical setting John Peel called "plangent Cajun-tinged jiveabilly". "If Elvis had been a Marx brother, he would have created Pink Peg Slax", declared James Brown in NME. Boozy Chef Keith Floyd wrote "You don't need an oven when you're cooking like Pink Peg Slax". Marc Almond said "play on this B-side for a hundred quid" and Tim "Chet" Strafford Taylor duly obliged. Record companies and the music press were puzzled by the band's unwillingness to play the game and their need to take the piss out of everything. In spite of this their two 7" singles, EP and two albums received excellent reviews and they recorded four BBC Radio One sessions (two for Peel) and gigged extensively in the UK and Europe before falling apart in 1990 as Dance Music took hold everywhere.

The following was also provided by Vince, again with thanks.

The song Dripping (My Love For You) was Pink Peg Slax’ first single and was played by John Peel as soon as they handed him a white-label copy at gig they both did at Leeds Poly in 1984. In fact, the Slax sent all their white-labels to Peel and he played them straightaway. They did several gigs with him, including an awkward moment in 1987 at Wetherby Arts Week when Vince spat on some of the kids in the audience at the Wetherby High School Hop. “Did I see you spit at the kids?,” asked John afterward, in an incredulous, tremulous, sardonic voice. What we loved about Peel was he knew EXACTLY what we were trying to do musically, even though it was an obscure and doomed attempt to inject piss-taking humour, camp, deliberate inanity but a certain knowing literariness into the po-faced music of the time. He knew every single one of our favourite songs and did his famous bursting into tears thing (having warned us he would do this) when recounting seeing Duane Eddy at the Liverpool Empire. There was no 50s or 60s obscure piece of shite he didn’t know. We absolutely loved him. Apart from NME, Sounds and Melody maker – who uniformly gave our records good reviews, and the other R1 jocks and their producers, who were playing us earlier and earlier in the day – we had no friends in the biz (well, Keith Floyd liked us and put tracks on Floyd On France: another fantastic bloke and a bigger piss-head than me, and a heavier smoker). What I mean is, we didn’t sell many records!! I am still recording and performing original material and we will be gigging properly this year if we get some decent reviews of our “Best Of” album. 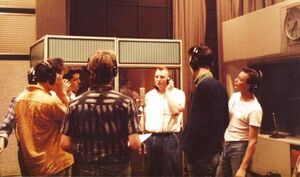 *Two Peel sessions, neither with any known commercial release. Line-up: Vince Berkeley (guitar/vocals); Chet Taylor (bass); Abner Cavanagh (drums); Martin Lefou (fiddle and piano); and Ade & Wink (backing vocals). Joined on the second session by Colin Moderne (acoustic guitar, piano). The photo on the right was taken during the recording of the first.

In early October 1984, Peel chose all the bands for an ICA Rock Week event at the Institute Of Contemporary Arts in central London, with all the performances recorded for broadcast on his or Janice Long's programmes. The advance publicity for the event proclaimed, "John Peel is putting the fun back into being pretentious."

Retrieved from "https://peel.fandom.com/wiki/Pink_Peg_Slax?oldid=226969"
Community content is available under CC-BY-SA unless otherwise noted.