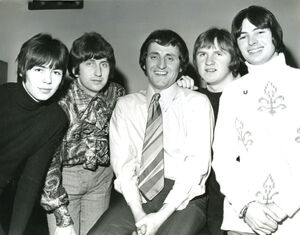 Plastic Penny were an English 1960s pop band, formed in November 1967 before splitting up in August 1969. The group had one hit single early in 1968: the song "Everything I Am". Most of the members went on to greater fame with other bands or in session work. Most of their material was psychedelic pop, with leanings towards a prog rock sound on some of the band's album tracks. The majority of the material was written by three of the band members: Brian Keith, Paul Raymond, and Tony Murray. Keith later left the band, leaving it a quartet, and Raymond took over lead vocals. Plastic Penny's output was released on the Page One Records. The band appeared at the first Isle of Wight Festival, held on 31 August 1968.

"Everything I Am" reached a high of number six in the UK Singles Chart. The song, enhanced with a string arrangement, was a slow ballad version of a song originally recorded by the Box Tops. Mick Grabham (then billed as Mick Graham) moved on to play with Cochise and then Procol Harum. Keith later became the lead vocalist with The Congregation, who share the "one-hit wonder" tag with Plastic Penny. Raymond replaced Christine Perfect in Chicken Shack, then joined Savoy Brown and later played several spells with the rock band UFO. He died of a heart attack on 13 April 2019. Nigel Olsson became an in-demand session musician, most notably drumming on much of Elton John's early work and back with him from 2001. He also worked with the Spencer Davis Group, Uriah Heep, Kiki Dee, Neil Sedaka, Rod Stewart and Leo Sayer. Tony Murray played on Elton John’s Empty Sky with Olsson, and then joined The Troggs.

The group's third and final album Heads I Win, Tails You Lose was a compilation of the band's more obscure recordings, issued in 1970 after the group had disbanded. (Wikipedia) Their entry on AllMusic takes a rather negative view of the band's career, stating that they were "unremarkable" and that Everything I Am was "a laboured ballad...that wasn't even one of their best songs...their material...sometimes recalling the Who a bit."

Given the band's pop leanings, it was little surprise that they were invited to do a session for the early, poppier Top Gear on which they featured the single: the Maida Vale version added Tony Gilbert for 4 musicians (String Quartet), according to The Peel Sessions. However, this was shortly before Peel took over as sole compere and (equally unsurprisingly) the session was never repeated. They featured on his sole Top Of The Pops appearance of the year. Raymond also played on Chicken Shack's last Peel Session (1969).

Retrieved from "https://peel.fandom.com/wiki/Plastic_Penny?oldid=213016"
Community content is available under CC-BY-SA unless otherwise noted.