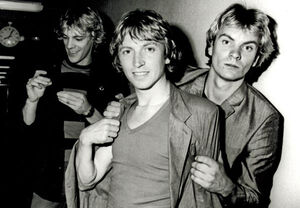 The Police were an English new wave band formed in London in 1977. For the majority of their history, the band consisted of Sting (lead vocals, bass), Andy Summers (guitar) and Stewart Copeland (drums). The Police became globally popular in the late 1970s and are generally regarded as one of the first new wave groups to achieve mainstream success, playing a style of rock that was influenced by punk, reggae, and jazz. The group disbanded in 1986, but reunited in early 2007 for a one-off world tour lasting until August 2008. Their 1983 album, Synchronicity, was number one on both the UK Albums Chart and the US Billboard 200, and sold over 8 million copies in the US. The Police have sold more than 75 million records worldwide, and were the world's highest-earning musicians in 2008, thanks to their reunion tour. The band has won a number of music awards throughout their career, including six Grammy Awards, two Brit Awards (winning Best British Group once), an MTV Video Music Award, and in 2003 were inducted into the Rock and Roll Hall of Fame. Four of their five studio albums appeared on Rolling Stone's list of the 500 Greatest Albums of All Time. The Police were included among both Rolling Stone's and VH1's lists of the 100 Greatest Artists of All Time.

Lead singer Sting (real name Gordon Matthew Thomas Sumner) embarked on a solo career in 1985 and has since had 19 UK Top 40 albums and 24 UK Top 40 singles. He also participated as a solo artist in the Band Aid project in late 1984. In 2003 he received a CBE for services to music. He continues to record and perform live as Sting. He is also a noted activist for human rights and environmental issues.

Peel saw the band perform at the Pink Pop Festival in the Netherlands in June 1979[1]. He was suitably impressed with their performance to book them to record a session for the show, which they did in July 1979. However in later years Peel seemed to have regrets at inviting the band for a session, as he thought the group's music was too safe and not challenging enough. On Peeling Back The Years 4 (Transcript) in 1987 when talking to John Walters, he mentioned:

"... we only barely had the Police – after I’d seen them playing in a concert in Holland and they’d played particularly well, and they I think would still argue that it was perhaps their best ever gig, so I was rather carried away with that."

"The Police were another of my big regrets. They'd been on at Peel for ages, buying him pints of lager and so forth and eventually he succumbed and they did a session, but for me it was retro. It wasn't the sort of sound you wanted to hear on the Peel show. You knew it would probably be very popular and sell millions but it wasn't right for us." (Q Magazine, Art For Art's Sake, p.11.)

During the session, the band recorded, as a standalone number, a part of their song "Can't Stand Losing You" that they only performed in concert. That piece of music was subsequently reworked as the title-track of their second album "Reggatta de Blanc".

The Police also played at the Reading Festival in August 1979, for which Peel acted as the compere.

In 1991 Sting released a cover version of the Elton John/Bernie Taupin song Come Down In Time for the Two Rooms tribute album, a track which originally featured on John's Tumbleweed Connection album which had been appreciated by Peel on its release in 1970. There is no evidence of the DJ playing any of Sting's solo records although in 1993 he played Jamaican In New York by Shinehead and in 2002 Rastaman in New York by Mystic Revealers, both of which are based on Sting's 1988 song An Englishman in New York.

One and only session. No known commercial release.

(The following list was compiled only from the database of this site, Lorcan's Tracklistings Archive and Ken Garner's Peel Sessions (pg218, 220), and is certainly incomplete. Please add further details if known.)