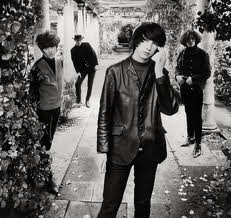 Primal Scream are a Scottish alternative rock band originally formed in 1982 in Glasgow by Bobby Gillespie (vocals) and Jim Beattie. The band performed throughout 1982-1984, but their career did not take off until Gillespie left his position as drummer of The Jesus and Mary Chain. The band were a key part of the mid-1980s indie pop movement called the C86 scene, but eventually moved away from their more jangly sound, taking on more psychedelic and then garage rock influences, before incorporating a dance music element to their sound. Their 1991 album Screamadelica broke the band into the mainstream.

Peel was a fan of Primal Scream when they were part of the C86 scene and invited them to record sessions for his show in 1985 and 1986. When they started to use more psychedelic sounds and dance elements to their music, however, he somehow lost interest in them. By the mid-90s, he was quoted saying that the band was not his cup of tea.[1] In 1997, Peel started to show interest in the band again and started playing tracks from them:

"The other day, I was driving around listening to the radio, amongst other things, and this came up, and I thought, that's really good, and then at the end they said, "That's Primal Scream," and I always thought to meself, I didn't really like Primal Scream apart from the first couple of singles, but there are some good tracks on the new LP: probably in the charts by now, but that doesn't matter a great deal, I don't think." [2]

Retrieved from "https://peel.fandom.com/wiki/Primal_Scream?oldid=237489"
Community content is available under CC-BY-SA unless otherwise noted.