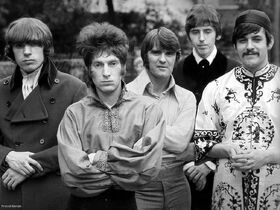 Procol Harum are an English rock band formed in 1967. They contributed to the development of symphonic rock, and by extension, progressive rock. Their best-known recording is their 1967 hit single A Whiter Shade Of Pale, which is considered a classic of popular music and is one of the few singles to have sold over 10 million copies. Although noted for its baroque and classical influences, Procol Harum's music also embraces the blues, R&B, and soul....(Read more)

Matthew Fisher (who had played the Hammond organ on A Whiter Shade Of Pale) left the band in mid-1969 after producing the LP A Salty Dog and in 2009 successfully sued for a share of the songwriting royalties on A Whiter Shade Of Pale. After two less than successful albums, Home (1970) and Broken Barricades (1971), Robin Trower, whose frustration was becoming increasingly evident, left to form firstly Jude and then his own band.

The band arose from the ashes of the Paramounts: Brooker, Copping, Wilson and Trower were all members, and Peel played Poison Ivy long after the fact in 1978. They were named after a Burmese cat belonging to their manager's friend: it is also cod Latin for 'beyond these things.' Brooker co-opted lyricist Keith Reid (who, according to Joe Boyd's book White Bicycles (p.150), had tried to persuade Boyd to sign him for Elektra Records in 1966, "on the basis of a few stanzas of doggerel") into the band, and they had a precocious success with a mesmeric song that virtually soundtracked the Summer Of Love.

"A Whiter Shade Of Pale" owed much of its success to heavy exposure on Radio London, while Peel was working on the station. The Radio London website describes how enthusiastic listener response to advance plays of the single in April 1967 persuaded the record company to issue it in the following month. It quickly reached the top of the Radio London Fab 40 and the national charts, and remains one of the records closely associated with the mood of the summer of 1967. Yet Peel later said he preferred the follow-up single, Homburg, released in autumn 1967 after the pirate stations had closed down and only a minor hit. Nevertheless Procol Harum were booked for a BBC session which went out on the second Top Gear (although not one presented by JP).

Three more Peel sessions followed in 1968 and 1969, followed by a gap until 1974, when Procol Harum recorded their final session for Top Gear. Although these sessions gave the band vital public exposure, their attitude towards them was essentially prosaic: Brooker said, "You did the BBC shows as a way of getting your new album on the radio," and to Mick Grabham (guitar) they were "just another job." [1]

At first Procol Harum found it hard to follow their initial success, but gradually they gained a reputation, especially in the USA, as an album band, touring extensively and having a surprise success in the early 1970s after collaborating with Canada's Edmonton Symphony Orchestra on a live album. The "symphonic rock" aspect of their style never seemed to be specially appealing to Peel, but he continued to support them, with sessions and album track plays until the mid-1970s (in 1974 he made Nothing But The Truth his single of the week [2]). At the advent of punk, the band seemed to be part of the old guard that the new movement was designed to sweep away: Bob Harris related how members of their road crew protected him from Sid Vicious and followers of the Sex Pistols in the Speakeasy Club after visiting it for "a quiet drink". [3]

Later in his career, Peel revisited their early material.

Retrieved from "https://peel.fandom.com/wiki/Procol_Harum?oldid=250858"
Community content is available under CC-BY-SA unless otherwise noted.