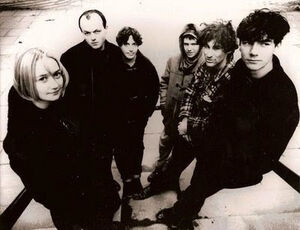 Prolapse were a band formed in Leicester, England, UK active from c.1992 to c.2000. The group's sound was a mixture of punk rock, krautrock and shoegazing styles.

Peel was on the same bill as Prolapse on at least one occasion, at De Montfort University, Leicester, 1992-11-26 (see Songkick).

Mick from Prolapse phoned in football match reports to the Peel programme on the following dates (many thanks to Lorcan's Tracklistings Archive for this information):

(Message from RobF to the Peel Mailing List, with an explanation of the Prolapse/Kingstonian connection from a band member: "Cherry Red sponsored Kingstonian, so we would get in for free and sit in the directors box, We followed their FA Cup run that season, Dover, Brighton and then sadly knocked out by Aylesbury of all people! After the Brighton game (1st round proper), there was an old chap in the bar, who said he'd been following them for 80 years and this was the happiest day of his life! The Aylesbury game actually made it onto A Question of Sport what happened next as the Aylesbury team did a duck dance in celebration, which may well have been one of the earliest mass novelty celebrations." View the Aylesbury duck dance celebration here.)

(The following list is compiled only from the database of this site and Lorcan's Tracklistings Archive. Please add further details if known.)

Retrieved from "https://peel.fandom.com/wiki/Prolapse?oldid=235856"
Community content is available under CC-BY-SA unless otherwise noted.