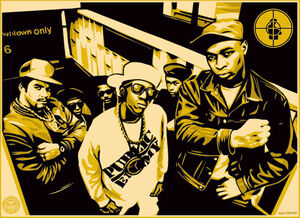 Public Enemy is an American hip hop group consisting of Chuck D, Flavor Flav, DJ Lord, The S1W group, Khari Wynn and Professor Griff. Formed in Long Island, New York, in 1982, Public Enemy is known for their politically charged lyrics and criticism of the American media, with an active interest in the frustrations and concerns of the African American community. Their first four albums during the late 1980s and early 1990s were all certified either gold or platinum. The group have been controversial with members supporting a black supremacist organisation called the Nation of Islam, who have been known for advocating anti-semitism and homophobia.

The group got the attention of Peel, who was impressed with their innovative use of sampling and scratching, using riffs from bands such as Slayer in the track She Watch Channel Zero to the band's political lyrics that promoted black awareness, rather than the stereotypical hip hop image of degrading women. The band were regularly played on Peel's show and even entered in the Festive Fifty in 1987 and 1988. After 1992 Peel lost interest in them, until a few remixes of the band's material were played on his show, including one from Evolution Control Committee, who used a mashup of Public Enemy's "By the Time I Get To Arizona" and "Rebel Without a Pause" with music from Herb Alpert and the Tijuana Brass, which entered at number 20 in the 1998 Festive Fifty.

Retrieved from "https://peel.fandom.com/wiki/Public_Enemy?oldid=249597"
Community content is available under CC-BY-SA unless otherwise noted.