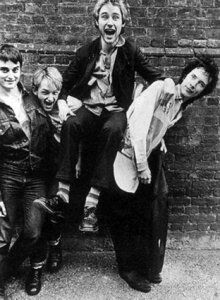 Public Image Ltd (PiL) are an English post-punk band formed by vocalist John Lydon (aka Johnny Rotten), guitarist Keith Levene and bassist Jah Wobble, with frequent subsequent personnel changes. Lydon is the sole constant member of the band. Lydon emerged after the break-up of the Sex Pistols with PiL's Public Image: First Issue (1978). His new band had a more experimental sound: Wobble's "droning, slow-tempo, bass-heavy noise rock, overlaid by Lydon's distinctive, vituperative rant". Their early work is often regarded as some of the most challenging and innovative music of the post-punk era … (read more at Wikipedia)

Peel was enthusiastic about Public Image Limited's material when they first started after Lydon's departure from the Sex Pistols. However, by the mid-80's, he had lost interest in the group's material, although on occasions, Peel played some of the band's early releases.