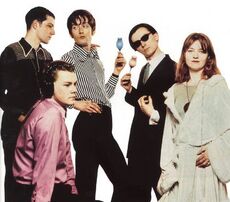 "When I hit puberty with a bang and started being interested in girls and stuff like that, my main kind of education if you like about those matters had been from listening to songs, and I felt that the information I'd been given from pop songs really didn't prepare me for the real world of trying to go out with girls and relationships and stuff. And so I consciously wanted to write pop songs that had the messy bits in, and the kind of awkward fumbling bits, because I felt that I'd been sold short in some way, and I wanted to provide a public service." (Jarvis Cocker, Desert Island Discs, BBC Radio 4, 2005-04-25.)

Pulp are a band from Sheffield, England who formed in 1978. The original line-up consisted of Cocker, schoolfriend Peter Dalton, Mark Lockwood and David Swift. Playing their first gig in 1980, they took many years to find commercial success, despite the fact that Cocker gave Peel a demo tape at one of his roadshows in 1981 [1], which JP promised to listen to on the way home, and was sufficiently impressed for Chris Lycett to offer them their first session either three days or a week and a half later, depending on Cocker's memory.

When Jarvis and Nick Banks visited Peel Acres to take part in a pre-recorded interview broadcast as part of a Pulp special on 30 September 1995, the initial session was repeated for the first time in thirteen years, and, since Peel claimed to remember nothing about it, Cocker was able to supply him with a good deal of information.

As a result of the kudos surrounding the offer, the Sheffield Star actually put the band on their front page and wanted to take pictures of them wearing school uniform, but this was refused. Not having proper equipment, the band had to borrow a bass amp containing a graphic equaliser, and brought with them a home-made synth drum. Dale Griffin was the producer: Cocker said, "I think he thought, I'd like this to finish soon so that I can go home."

Hearing these tracks, which display a mixture of influences including that of Joy Division, embarrassed Jarvis, but he used it as a weapon to persuade his mother that he should be a musician rather than going to Liverpool University. (There are conflicting reasons as to why he never did this. Cocker admitted on Desert Island Discs that he was due to read English, but flunked the interview after pretending that he had read a Thomas Hardy novel he'd barely started. Wikipedia claims he had had a successful practice session with prospective Pulp members Russell Senior and Magnus Doyle which persuaded him to try an artier approach to his music.)

Despite the fact that the first session was broadcast three times in six months, a mixture of bad record deals and the lack of a defining style ensured that Pulp would spend the rest of the 1980s groping for fame. Their first LP release, It, was a commercial failure, most of the original members left to go to university, and Jarvis was confined to a wheelchair for some months after falling out of a window. He later regrouped with a line-up including Doyle's sister Candida on keyboards and signed to Fire Records, becoming label mates with the Farm. The relationship with the label was a stormy one, and they left the label when the release of the Separations LP was unaccountably delayed.

JP gained a renewed interest in the band when he saw them supporting the Fall at the Corn Exchange in Cambridge [2] He was convinced as a result of this that the band had recorded a large number of sessions for his programme, but was shocked to find only one when he consulted Ken Garner's In Session Tonight.

The release of the album His N' Hers in 1993 and renewed interest in their sound by JP kick-started a wave of growing popularity. They went on to further success with the UK number one album Different Class which featured the singles Common People, Sorted for E's and Whizz (both of which made number 2 in the UK singles charts) and Disco 2000. In 1997 Peel chose Different Class as his 4th favourite album of all time and the band presented three of Peel's shows whilst he was away in November of that year. After Peel's death, Jarvis Cocker narrated the Radio One tribute, Teenage Dreams So Hard To Beat.

In all, Pulp had fifteen chart entries with thirteen different songs. 'Common People' featured in two successive charts, the first time in the session version (a remarkable feat considering that it was only broadcast once and was not commercially available until 2006) and the official release on Different Class, where it hit the top spot (and would reappear in the final All-time chart). In fact, in the 1995 list, the band had the highest number of entries (six) and held down the top two spots, something which had not happened for 10 years. Oddly, John chose to play the session version of 'Underwear' in 1995, even though that was recorded the previous year and an official release had already seen the light of day.

In November 1997, members of Pulp presented a week of Peel shows on R1 while the DJ was on holiday.

The list below is almost certainly incomplete and has been compiled only from the database of this site. Please add further information if known.