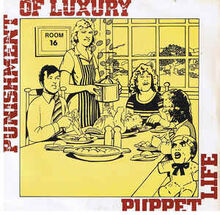 Punishment of Luxury, also known as Punilux, are a four-man post-punk band from Newcastle, England, who were active in the late 1970s and early 1980s. They released an album Laughing Academy on United Artists, and another on Red Rhino Records. They reformed in the late 1980s and again in 2007.

Peel often played Punishment Of Luxury on his shows during the 70's, including two sessions between 1978 and 1979. By the 80's, Peel rarely played material from the group.

Retrieved from "https://peel.fandom.com/wiki/Punishment_Of_Luxury?oldid=237163"
Community content is available under CC-BY-SA unless otherwise noted.