(This page covers both Queen and Freddie Mercury as a solo artist.) 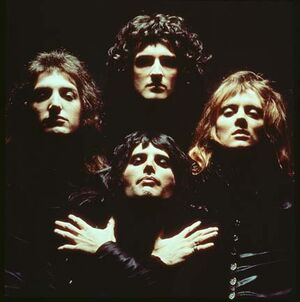 "I’ve never seen them live. I must admit I’d like to – a band that sounds like nutters, actually, and I like that because I like rock music to sound a little out of control." (John Peel, unknown date)[1]

Queen are a British rock band formed in London in 1970, originally consisting of Freddie Mercury (lead vocals, piano), Brian May (guitar, vocals), John Deacon (bass guitar), and Roger Taylor (drums, vocals). Queen's earliest works were influenced by progressive rock, hard rock and heavy metal, but the band gradually ventured into more conventional and radio-friendly works, incorporating further diverse styles into their music.  Before joining Queen, Brian May and Roger Taylor had been playing together in a band named Smile with bassist Tim Staffell. Freddie Mercury (then known as Farrokh/Freddie Bulsara) was a fan of Smile, and encouraged them to experiment with more elaborate stage and recording techniques after Staffell's departure in 1970. Mercury himself joined the band shortly thereafter, changed the name of the band to "Queen", and adopted his familiar stage name. John Deacon was recruited prior to recording their eponymous debut album (1973). Queen enjoyed success in the UK with their debut and its follow-up, Queen II (1974), but it was the release of Sheer Heart Attack (1974) and A Night at the Opera (1975) that gained the band international success. The latter featured "Bohemian Rhapsody", which stayed at number one in the UK Singles Chart for nine weeks; it charted at number one in several other territories, and gave the band their first top ten hit on the US Billboard Hot 100. (A 1991 re-release pursuant to Freddie Mercury's death made this song the only one in UK chart history to be the Christmas no.1 twice in exactly the same version.) By the early 1980s, Queen were one of the biggest stadium rock bands in the world, and their performance at 1985's Live Aid is widely regarded as one of the greatest in rock history. In 1991, Mercury, who also embarked on a brief solo career in the mid-80s, died of bronchopneumonia, a complication of AIDS, and Deacon retired in 1997. Since then, May and Taylor have infrequently performed together, including a collaboration with Paul Rodgers under the name Queen + Paul Rodgers which ended in May 2009. Estimates of their album sales generally range from 150 million to 300 million albums, making them one of the world's best-selling music artists.

In a 1992 interview on Partners In Dispute, Peel described the early music of Queen and Elton John as radical, something nobody else was doing, but said both had since been copied. Peel invited Queen for several sessions, which the band did in 1973 and 1977. Although Queen were first played on Peel's show, they were dropped from his playlists after punk started to become popular in the late 70s and he shunned their subsequent material. However, after Freddie Mercury died in 1991, Peel surprisingly played one of Queen's more commercial tracks, Crazy Little Thing Called Love, on his 24 November 1991 show as a tribute.  After Peel's death in 2004, Roger Taylor paid the following tribute:

"John Peel was the first DJ in the world to play Queen. His was the only show in the 60's to bring us all the music from that era, of lasting interest. His contribution was pivotal and vital to the progression of popular music. What a huge gap he will leave." [2]

In 2012, all of Queen's LPs until 'Flash Gordon' (1980) were among the first 100 albums by artists beginning with Q when details of Peel’s record collection were initially released via TheSpace website. (See Record Collection: Q.) John Peel Archive also found a letter to Peel from Freddie Mercury thanking him for his support ahead of the release of 'Queen II' (1974).[3] [4]

"'News Of The World' was released on October 28th 1977 - and this was also the day in which Queen returned to Maida Vale Studios in London to record their sixth and final session for BBC Radio. It was unusual for a band of Queen's then stature to want to record sessions for the BBC, as they were primarily used as a promotional tool for up-and-coming (and as in Queen's case back in February of 1973 - unsigned) artists.

Produced by Jeff Griffin and broadcast on November 14th 1977, the band ripped through roaring renditions of four of the highlights from the new album - 'Spread Your Wings': an energetic reworking closer in style to the later live renditions than the familiar album cut; 'It's Late': heavier than the album version and containing an improvised section reminiscient of fellow 'News Of The World' track 'Get Down, Make Love'; 'My Melancholy Blues': Freddie's haunting ballad with a Red Special guitar part absent from the album version; and 'We Will Rock You': a two part rendition consisting of the familiar stomp-clap version and a fully fledged rocked up 'fast' reworking that would later open Queen concerts the world over.

This session is also interesting for the inclusion of a spoken word passage from a Radio Four reading of Herman Hesse's work Siddhartha. This was discovered by the band purely by accident - the tape their sessions was being recorded onto had previously contained this reading, and the band decided to include a snippet in between the two versions of 'We Will Rock You' they were recording."

Retrieved from "https://peel.fandom.com/wiki/Queen?oldid=243365"
Community content is available under CC-BY-SA unless otherwise noted.