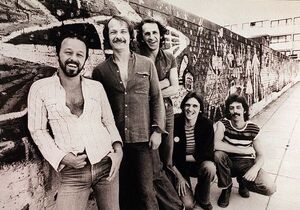 Racing Cars were a Welsh pop/rock band, formed in the Rhondda Valley, Wales in either 1973 (Wikipedia), or 1975 (AllMusic). Their height of commercial success was in 1977, when They Shoot Horses, Don't They?, an edited version of a track from the LP Downtown Tonight, hit no. 14 on the UK singles charts. This was a one-hit wonder, though, and after their third LP the band split in the late 1970s, reforming sporadically. In the interim, lead vocalist and guitarist Gareth Mortimer released solo material that attracted little interest and was active as a session singer. He died at his home in the Rhondda of cancer on 17 December 2015 at the age of 66.

Before their chart success, Racing Cars' They Shoot Horses, Don't They? had already reached no. 7 on JP's inaugural 1976 Festive Fifty, one of only two records from that year to do so, and John noted their debut session as one of that year's most outstanding: he also mentioned receiving a Christmas card from the band. The song resurfaced in the Peelenium 1976, which appears to have been the only play for Racing Cars since 1978. Additionally, they recorded five sessions for Peel's show, none of which has seen a commercial release: he continued to support them through punk's first wave, even though their brand of MOR was rapidly seen as being out of step with the music of that era.

All three of the band's LPs were found in John's record collection after his death. ([2], [3], [4]) In a related video for John Peel Archive, R Is For Racing Cars, guitarist Gareth Mortimer recalled playing gigs attended by Peel and the band's appearance in the 1976 Festive Fifty.

Retrieved from "https://peel.fandom.com/wiki/Racing_Cars?oldid=239723"
Community content is available under CC-BY-SA unless otherwise noted.