Radio London (not to be confused with various BBC local radio stations with similar names) was, with Radio Caroline, the best-known of the offshore pop pirate radio stations of the 1960s. It ran from late 1964 until August 1967, when the government's Marine Offences Act, which outlawed pirate radio, forced it to close down.

Peel joined Radio London on March 8 1967 and worked for the station until its closedown on 14 August 1967. He followed the standard working pattern of two weeks on board ship, followed by a week's shore leave, gradually making a name for himself as the host of late-night shows, initially London After Midnight and, at weekends, the three-hour John Peel Show from 11 p.m. on Saturday night until 2 a.m Sunday morning. These programmes developed into the Perfumed Garden; although no-one knows exactly when the programme's name changed, the most likely dates would seem to be May or June 1967. Apart from a brief extract from a March 1967 show, there are no known available Radio London recordings of Peel from before July 1967. 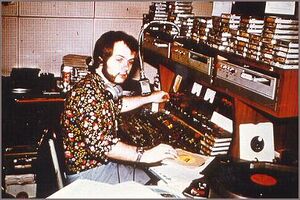 Early in 1967 – I was married at the time to an American girl, and it was a fairly catastrophic marriage, so I decided to get out of the area to the extent of coming back to Britain. And went to live with my mother in Notting Hill. And obviously I had no work, and no expectation of work. And a fellow who was living next to her at the time had dealings with Radio London, the pirate ship, and he said why didn’t I go along and see Alan Keane, who was running the station from the offices in Curzon Street. So I went along. Fortunately, they didn’t ask me to audition. I just said I’d been working on the radio in California and they were sufficiently impressed by this to give me a job. And I was very pleased to get it, because as I said, my marriage was in tatters already and the idea of being on a ship for two weeks out of three seemed to be terribly appealing, because it meant I was away from domestic strife.

So I went out there, and as junior member of the team, I had to do two programmes. I had to do a daytime programme, which was just the regular Radio London fare, you know. They used to play a lot of new records – more new records and more artfully chosen new records. I mean, they weren’t bought on, unlike Caroline. But I also had to do a late night programme, from 12 until 2. And initially I used to just do this as I had done the other programme. I mean, run all the commercials and do the weather and the news and all of the things that I was supposed to do.

Gradually it dawned on me that no one was actually listening to this programme – I mean, no one in the Radio London office, and certainly none of the people on the ship. So I started to improvise a little bit and gradually stopped running the ads and so on, and playing more of this music that I had brought back from America with me. And also adding a British dimension with people like the Incredible String Band and Hendrix and Pink Floyd, I suppose, Tyrannosaurus Rex, all these sort of people. I called the programme the Perfumed Garden..

Retrieved from "https://peel.fandom.com/wiki/Radio_London?oldid=109765"
Community content is available under CC-BY-SA unless otherwise noted.