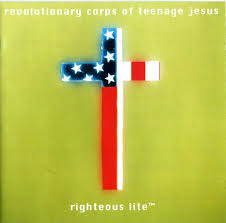 Revolutionary Corps Of Teenage Jesus was the name given to a conglomerate group that latterly featured Alan Vega of the band Suicide. In 1999, the album Righteous Lite, a collaboration between Vega and Stephen Lironi (originally of Altered Images, later Creeping Bent’s in house remixer), was released. It was reissued in 2015 to celebrate the label’s 20th anniversary. The collaboration happened after a RCTJ remix of Suicide’s 'Frankie Teardrop'. Little other information about the band is available online.

Peel picked up on the Suicide remix on release and gave regular airplay to Righteous Lite.

Retrieved from "https://peel.fandom.com/wiki/Revolutionary_Corps_Of_Teenage_Jesus?oldid=235961"
Community content is available under CC-BY-SA unless otherwise noted.