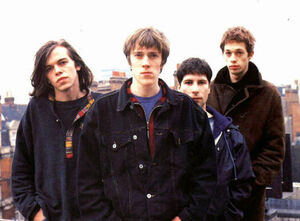 Ride were a British shoegazing band that formed in 1988 in Oxford, England, consisting of Andy Bell, Mark Gardener, Laurence "Loz" Colbert, and Steve Queralt. The band were initially part of the "shoegazing" scene that emerged in England during the early 1990s. Following the break-up of the band in 1996, members moved on to various other projects, most notably Bell who became the bassist for Oasis. In 2001, the band members were briefly reunited for a one-off performance for a television show. Their debut album Nowhere has been named one of the greatest albums of the shoegazing genre, Nowhere was voted number 74 on Pitchfork Media's list of the Top 100 Albums of the 1990s, and the single "Vapour Trail" was voted at number 145 on Pitchfork's Top 200 Tracks of the 90s. The album is also included in the book 1001 Albums You Must Hear Before You Die. (more on wikipedia)

The band were discovered by Jim Reid (Jesus and Mary Chain) through a demo that was in the possession of DJ Gary Crowley in 1989. Alan McGee, the founder of Creation Records, heard of the band through Jim Reid, liked their demo and signed them. Peel discovered the band via Creation Records and invited them to do two sessions for his show. He also heavily featured their Fall EP and the first album, Nowhere. However, he quickly identified their hubris:

"I'm vaguely fearful for the future of Ride really because I can see them becoming a kind of Simple Minds for the 1990s. I know that's an awful thing to say about a band, but I can really see that happening. I mean, I know they're cute and everything, but that doesn't always help." [2]

Sure enough, when the band released their third album Carnival Of Light in 1994, Peel was disappointed with their change of style of music and played no tracks from it. The band itself also was critical of their album and by the end of 1994 some of them sarcastically called it the Carnival Of Shite. At the end of 1995, the band were split into what musical direction they would take, Mark Gardener, the singer wanted the band to use dance elements, while the others disagreed. By 1996, the band had split up, until 2001 when they briefly reunited for a one off TV performance.

All their sessions are available on Waves (2003, Ignition Records)

Retrieved from "https://peel.fandom.com/wiki/Ride?oldid=226917"
Community content is available under CC-BY-SA unless otherwise noted.