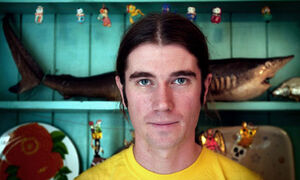 Robert John Gorham, (born 24 June 1973 in Portsmouth) known by the pseudonym Rob da Bank, is an English disc jockey and entrepreneur. He presented a Friday-night/Saturday-morning show, Rob da Bank, on BBC Radio One from 5am-7am, focused on promoting new left field music. Da Bank first started out in journalism, where he worked for a dance magazine called Muzak. In 1995, he launched his nightclub Sunday Best, which later developed into a record label, where he promoted his acts at numerous music festivals. In 2002, BBC Radio One asked him to present a leftfield music show called The Blue Room which he co-presented with Chris Coco until 2006. He presented his own weekly show on the station from 2005 until 2014, when it was was announced in June that the DJ would be leaving Radio One as part of a wider personnel revamp [1]. The DJ's final show on Radio One was broadcast on 30 August 2014 [2]. He presented a number of occasional shows for BBC Radio 6 Music during 2014, with a final programme being aired in January 2015. Rob also has own music festival at the Isle of Wight called Bestival.

Rob Da Bank was due to sit in for Peel in October for the second week of his holiday to Peru (26/27/28 October) before Peel's anticipated return on 02 November 2004 (Ken Garner The Peel Sessions, p.11). After Peel's death, Da Bank was contracted to present the Peel show until the end of 2004, when he also presented the 2004 Festive Fifty. For the first week of these shows, Da Bank followed the playlist that Peel had prepared before he departed for his holiday.

In February 2005 the three midweek Peel slots were allocated to individual DJs under the umbrella of the OneMusic show. Tuesdays went to Huw Stephens, Wednesdays to Ras Kwame and Thursdays to Da Bank. Rob hosted the 2005 Festive Fifty with Huw Stephens at the end of the year. After 2005, the Festive Fifty was allowed to move to Dandelion Radio from 2006.

Retrieved from "https://peel.fandom.com/wiki/Rob_Da_Bank?oldid=226908"
Community content is available under CC-BY-SA unless otherwise noted.