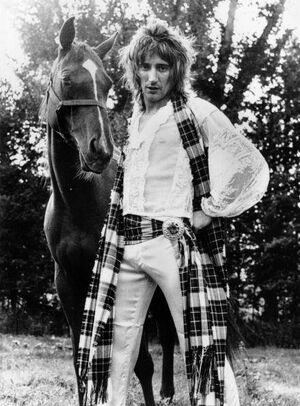 Sir Roderick David "Rod" Stewart, CBE (born 10 January 1945) is a British singer-songwriter and one of the best selling artists of all time, having sold over 100 million records worldwide. With his distinctive raspy singing voice, Stewart came to prominence in the late 1960s and early 1970s with The Jeff Beck Group and then Faces. He launched his solo career in 1969 with his debut album ‘An Old Raincoat Won't Ever Let You Down’, and his early albums were a fusion of rock, folk music, soul music and R&B … (read more at Wikipedia)

Peel first became aware of Rod Stewart in 1967, when Stewart sang on the Jeff Beck Group's "Rock My Plimsoul", which he played on the Perfumed Garden. Later he played Beck tracks with Stewart vocals from the band's LPs and sessions on Top Gear, and hired the singer to provide vocals on Python Lee Jackson's single, "In A Broken Dream". The DJ also featured tracks from Stewart's first two solo albums, which gained the singer some underground credibility at the start of the 1970s, but it was his enthusiasm for the Faces which brought him into regular contact with Stewart.

Stewart and Peel became, for a while, great friends: John's wife Sheila [1] relates how JP used to go to his house for dinner [2] and once they attended a Millwall football match together. He was also present, along with the other members of the Faces, at John's wedding, and apparently spent the whole time talking to John's Aunt Ailsa from Wales. Stewart's no. 1 hit Sailing, from the extravagant and overblown but hugely successful album Atlantic Crossing, made John's 1975 list of the best singles of the year: he also described the LP as a good one [3].

Stewart himself claimed [4] that he had had a "long, friendly relationship with Peel" who helped to popularise the Faces by saying "all sorts of supportive things" which "really helped to get us across to people and break down some resistance." He also claimed that the band caused him "terrible quantities of stress by keeping him in the pub opposite the studios until the very last minute before the broadcast was due to start." Certainly, Sheila agrees that it was Stewart's band that started Peel drinking alcohol again after several years of abstinence. However, Stewart also seems to be under the impression that John hosted a series called The Peel Sessions (which never existed) and claimed that the pair lost touch after he (Stewart) moved to Los Angeles (JP claims that celebrity went to his head in the same way as Pink Floyd, and criticised him for acting like a "berk" and becoming a tax exile.).

Stewart was pencilled in as one of the guest presenters of Kat's Karavan when Peel went on his final holiday to Peru for 19 October 2004, but ended up being replaced without explanation by Underworld.

Maggie May on Top Of The Pops

Stewart insisted on Peel being present on their Top Of The Pops performance of Maggie May in which he was required to mime to the mandolin part (the illusion is rather spoiled by JP holding the instrument flat on his lap). The part was actually played by Lindisfarne's Ray Jackson, who was only paid a flat session fee and later sued for royalties: this tends to lend credence to John's claim that Stewart was tight-fisted ([1]). In addition, Sheila says the Musicians' Union were extremely unhappy that a non-performer was being included in this way in a professional performance. JP had to furnish the union with a guarantee that the band had not offered him any payment, and the BBC cameramen were ordered not to allow John to be seen in shot. However, Stewart got to hear about this and thus took every opportunity to be seen behind John.

Peel was fairly proud of this moment (especially since it occurred during an unofficial BBC ban on him appearing on TOTP as a presenter) and during the 1976 Festive Fifty expressed a wish that he had a copy of his performance, although he was quite embarrassed years later when his children saw it on TV. Nevertheless, the song made it to his Peelenium 1971 list.

(The list below was compiled only from the database of this site. Please add further information if known.)

Retrieved from "https://peel.fandom.com/wiki/Rod_Stewart?oldid=256489"
Community content is available under CC-BY-SA unless otherwise noted.