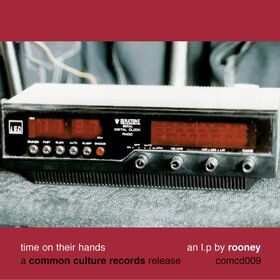 Paul Rooney initiated the UK band Rooney (this is NOT the US band who went on to use the name) with the EP Got Up Late in October 1997. It was recorded on a mini-disc four-track recorder in Newcastle-under-Lyme with Paul Rooney on all instruments and vocals and only five copies were self-released on Common Culture Records. The lo-fi music incorporated sometimes humorous — but often unsettling — spoken-sung lyrics describing everyday, mundane activities and observations, an approach which was consistent across all Rooney releases. BBC Radio 1's John Peel and BBC Radio Merseyside's Roger Hill played tracks from the record, and from the subsequent EP Different Kinds of Road Signs.

The debut album Time on Their Hands, of September 1998, was distributed by Cargo Records (UK), and featured the tracks Went to Town, Into The Lens, Throw Away, Touts, Scratched, Walked Round The Estate, and Fountainbridge amongst others. The writer Michael Bracewell described the album thus: "... [encountering] Time on Their Hands, 1998, by the group Rooney, the listener might be reminded of any and all of the following: Patrik Fitzgerald's dour requiem to hope, Tonight, the later songs of Ivor Cutler, the Intense Emotion Society of middle period Dexy's Midnight Runners, the industrial melancholy of Throbbing Gristle's Twenty Jazz Funk Greats and the ambiguous intellectualism of The Television Personalities, notably their re-issue, ...And Don't the Kids Just Love It." The album was widely and favourably reviewed, including notices by Stewart Lee in The Sunday Times, Tom Ridge of The Wire and Gary Valentine of Mojo magazine. The continued support of John Peel earned a place for Went To Town at number 44 in John Peel's Festive Fifty of 1998, and a Rooney Peel session in 1999 (where John initially misnamed them Rodney). The album received extensive airplay, including BBC Radio 3's Mixing It.

By 1999 Rooney had become a band with new members Colin Cromer and ex-Half Man Half Biscuit/Jegsy Dodd and the Sons of Harry Cross member Ian S Jackson (some of the final performances included Paul Rafferty, who was later a member of Hot Club de Paris), and were operating out of Liverpool, intermittently gigging at venues such as The Dublin Castle, London, and The Briton's Protection, Manchester. They appeared in events at art venues such as Ormeau Baths, Belfast; Grizedale Arts, Cumbria; and the My Eye Hurts project at Green Room, Manchester and Thread Waxing Space, New York. The second Rooney album On Fading Out was released in 1999, and the project ostensibly ended with the third and final album, On the Closed Circuit, in November 2000.

Stewart Lee curated the Rooney track Into the Lens for the CD/book The Topography of Chance in 2006, which also included Mark E Smith, Derek Bailey and Simon Munnery. In 2014 the three Rooney albums were made available for the first time on iTunes, Spotify and other digital platforms and in 2017 his track Lost High Street reached number 1 in that year's Dandelion Radio's Festive Fifty.

(JP: 'This is at number 44 and I was really pleased about this too.....An EP which as much as anything I was excited about because on the front of it there's a picture of the radio which I've got by my bedside: not the exact one, but the same model we've had on our bedside for something like 25 years now. Still works perfectly: I listen to, obviously to Radio 1 every single morning just to keep up with what's going on in the real world.')
1999