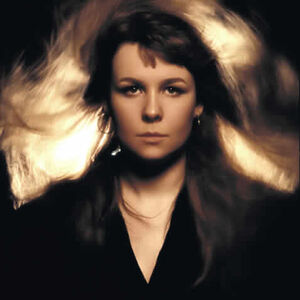 Alexandra Elene MacLean Denny (6 January 1947 – 21 April 1978) — known as Sandy Denny — was an English singer and songwriter, perhaps best known as the lead singer for the folk rock band Fairport Convention. She has been described as "the pre-eminent British folk rock singer".

After briefly working with British folk band the Strawbs, Denny joined Fairport Convention in 1968, remaining with that band until the end of 1969. She formed the short-lived band Fotheringay in 1970, releasing one album with them (another unreleased album surfaced over thirty years later), before focusing on a solo career. Between 1971 and 1977, Denny released four solo albums: The North Star Grassman and the Ravens, Sandy, Like an Old Fashioned Waltz, and Rendezvous. She is also noted as the only guest vocalist on a Led Zeppelin studio album, when she shared a duet with Robert Plant for "The Battle of Evermore" on Led Zeppelin's untitled fourth album (1971).

Music publications Uncut and Mojo, as well as the Sunday Express, have all called Denny Britain's finest female singer-songwriter. Her composition "Who Knows Where the Time Goes?" has been recorded by many artists as diverse as Judy Collins, Nina Simone, 10,000 Maniacs and Cat Power. (Read more at Wikipedia)

The front page photo of Melody Maker dated 25 September 1971 shows the Best Male and Female Singers in the paper's annual readers' poll, and both are Peel favourites - Rod Stewart and Sandy Denny. At the tine, Peel rated Sandy Denny very highly; she had recorded sessions for his shows with Fairport Convention and Fotheringay, and he and Top Gear producer John Walters had befriended her. (On a 1970 show [ref] Peel mentioned that she had made him a pair of miniature pyjamas for his birthday.) The DJ continued to support her during her solo career, introducing her in session and in concert, and interviewing her for the Sounds On Sunday show of 06 January 1974. She remained a Peel favourite, even if in the later stages of her career he was critical at times; on the show of 12 May 1977 he remarked that he was slightly less than satisfied with her new LP Rendezvous.

Although Sandy Denny's solo work received plenty of critical acclaim, she never achieved major commercial success, probably because many of her songs were too deeply personal and introverted for a mass public (although these qualities would win her the admiration of later generations of listeners). She made numerous appearances on radio and TV; besides her Peel sessions, her other BBC work included guest spots on 1960s BBC folk music shows before she joined Fairport Convention,.Sounds Of The Seventies sessions for Bob Harris and Alan Black, and an appearance on TV's Old Grey Whistle Test. According to Clinton Heylin's biography of Sandy Denny, No More Sad Refrains (Helter Skelter 2000), on the night of Sandy's death--21 April 1978--Peel opened his show "with three uninterrupted recordings of that clear, crystal voice, at its Fairport and Fotheringay peaks. Afterwards, Peel simply announced the death of his old friend Sandy Denny before beginning the show proper."

Sandy Denny's reputation continued to grow after her death, with tribute shows and repeats of session material appearing regularly on BBC Radio 2 from the late 1980s on. In his later years Peel played tracks from compilation albums of her work as they appeared. She influenced many performers of later eras - among them Green Gartside of Scritti Politti, who sang at a tribute concert to her in 2012. Peel remembered her fondly; on the show of 28 May 2002, he said that he was heartbroken when Sandy Denny died: “She was a wonderful person. I really liked her very much indeed.”

Retrieved from "https://peel.fandom.com/wiki/Sandy_Denny?oldid=208491"
Community content is available under CC-BY-SA unless otherwise noted.