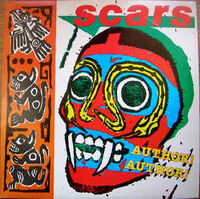 Scars (originally known as The Scars) were a post-punk band from Edinburgh, Scotland, and were a part of that city's music scene of the late 1970s and early 1980s.

Fronted by Robert King and featuring Paul Research on lead guitar, John Mackie on bass, and Calumn Mackay on drums, the band's first single was in 1979 on Fast Product; "Horrorshow"/"Adult/ery".

Peel invited the band to record two of his Sessions, once in February 1980 and another in May 1981.

Retrieved from "https://peel.fandom.com/wiki/Scars?oldid=237478"
Community content is available under CC-BY-SA unless otherwise noted.