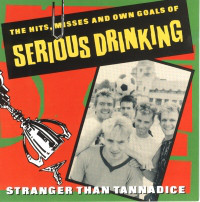 The band formed in February 1981, taking their name from a Sounds headline to an interview with the Cockney Rejects, with most members having met at the University of East Anglia. Band members were Martin Ling (vocals), Eugene Rodgers (vocals), Andy Hearnshaw (guitar, formerly of the Farmer's Boys), Jem Moore (bass), Pete Saunders (keyboards, also known from Dexys Midnight Runners) and Lance Dunlop (drums).

Their debut EP, 'Love On The Terraces' (produced by Madness's Mark Bedford) reached number 9 on the UK Indie Chart in 1982, with follow-up 'Hangover' reaching number 4 the following year. Debut album 'The Revolution Starts at Closing Time' also reached number 4, and was followed up in 1984 by a second album, 'They May Be Drinkers Robin, But They're Still Human Beings'. After another single, "Country Girl Became Drugs and Sex Punk", Moore and Dunlop left the band. The new line-up continued with sporadic gigs.

A compilation of their finest moments, 'Stranger Than Tannadice - The Hits, Misses and Own Goals' was released in 1990 on the Worker's Playtime label, to coincide with the 1990 World Cup, with a couple of singles also emerging in the 1990s.

Serious Drinking emerged from Norwich in the early 1980s as part of a local music scene strongly supported by Peel, who lived in the same East Anglia region. Guitarist Andy Hearnshaw was previously with fellow Norwich outfit the Farmer's Boys, while Terry Edwards of the Higsons also played occasionally with Serious Drinking.[1]

The band became regulars on Peel's show, recording four sessions and reaching #38 in the 1982 Festive Fifty with debut single 'Love On The Terraces', played on release by Peel on successive nights. The first and fourth sessions were repeated as best-of-year Festive Fifty Session Broadcasts in 1982 and 1983.

The DJ no doubt enjoyed the band's humour and football references. The first Peel session included a cover of You'll Never Walk Alone (broadcast as 'Walk Alone') as part of a series of session versions of the Anfield anthem for a proposed (but never realised) compilation album project.

Retrieved from "https://peel.fandom.com/wiki/Serious_Drinking?oldid=238350"
Community content is available under CC-BY-SA unless otherwise noted.