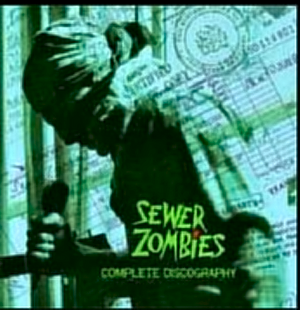 "When I played a track from this next LP on my programmes in Britain, I got several letters from people saying, "That is the worst band you've ever featured on your programme!"'...A valuable addition to our cultural lives, I think...destined to be stars, no doubt about it." [1]

"'That one is for Mick though, who wrote to say amongst other things, "No more of the Sewer Zombies!" This is perfectly shocking: the finest band that I've discovered in the last two or three years and people write in to complain about 'em! " [2]

The Sewer Zombies are a noise/lo-fi band from Fort Lauderdale, Florida, USA, and were formed in May 1983. Their music has been described as a "totally out of tune barrage of noise with incredible lyrics" [3]. Members are: Masher (vocals); Ripper (gtr); Cliff (bass); Donny (drums); and Jayne (synth). Peel was enthusiastic about their track They Died With Their Willie Nelson T-Shirts On," [1] ostensibly a tirade against drunk-driving, and the LP on Subversive, Reach Out And Touch..." (Its release was delayed due to pressing problems. JP played it on import, as it was unavailable in the UK until Ron Johnson issued it in 1988). However, Conquer The Galaxy appears to have been their final recording.

Retrieved from "https://peel.fandom.com/wiki/Sewer_Zombies?oldid=236532"
Community content is available under CC-BY-SA unless otherwise noted.