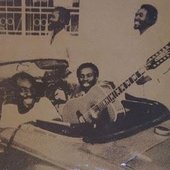 Shalawambe are a Zambian kalindula band formed in 1985 consisting of core members Dolenzy Kabwe (guitar, vocals), Claudie Kabwe (bass), Julius Chanda Kabwe (drums) and Ricky Chota (lead guitar, second vocals). Three of the band members are brothers and one cousin. The members make their living as farmers when not recording or performing. ‘Shalawambe’ is a word from the Bemba language and literally means ‘to stay behind and gossip’.

Peel discovered the band in 1987 through Charlie Gillett and invited the group for a session a year later. According to Margrave Of The Marshes, Peel sang some of the lyrics of the band's Samora Machel track when he was trying to impress the border guards when crossing from Zimbabwe to Zambia with his wife Sheila in 1988 to see the other side of the Victoria Falls. At the end of that year, listeners of his show voted Shalawambe session track Samora Machel number 37 in the 1988 Festive Fifty.

Retrieved from "https://peel.fandom.com/wiki/Shalawambe?oldid=234605"
Community content is available under CC-BY-SA unless otherwise noted.