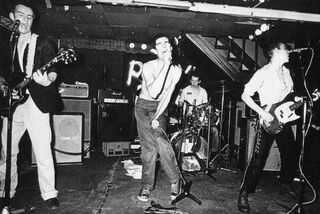 Sham 69 are a still extant punk band formed in Hersham in 1976. Their leader and frontman, Jimmy Pursey, took the name from worn graffiti: he also wrote liner notes for their LPs and the songs in collaboration with guitarist Dave Parsons. Their debut single, I Don't Wanna, produced by John Cale (Velvet Underground) was released in October 1977 on Step Forward (later to be the first of the Fall's many labels) and led to a signing with Polydor (doubtless eager to repeat their success with the Jam). In the interim, their sole Peel Session went out, previewing their first major label single, Borstal Breakout: in this title lay the origin of their first dissolution in 1979.
Chart success had followed with songs that were basically punk football chants, such as If The Kids Are United, Hersham Boys (their biggest hit) and Hurry Up Harry. Pursey routinely sent up their appearances on Top Of The Pops with ad libs such as, "Don't turn me off, turn me up!", and violence followed them from gig to gig and a particularly egregious appearance at Middlesex Polytechnic, broken up by skinheads charging the stage, led to a cessation of gigging. Pursey attempted to change the band's image and lose the streetpunk mentality: That's Life (1978), played in full on JP's show, was a try at a punk concept album, and The Adventures Of The Hersham Boys exhibited more conventional rock elements. However, they did not feature on Peel's show after their first break-up and he later stated that the Clash had come to sound like them (and no compliment was intended). [1]

Moreover, their stylistic endeavours only appeared to be postponing the inevitable: Jimmy defected to the Sex Pistols and the band folded. Pursey had dabbled in production with the Cockney Rejects and Angelic Upstarts and even collaborated with Peter Gabriel. His attempts to promote 'video parties' as a new form of entertainment came to nothing, and in 1987 Sham 69 reformed for several more albums. He was last in the public eye on a remake of Hurry Up Harry in 2006, recorded for England's World Cup campaign (and involving Graham Coxon), which cracked the UK Top 10. At the moment, there are two bands using the same name, one of which Pursey claims contains a line-up close to that of 1977.

"It's all a bit hazy really, just turning up in the old transit van - loading in the gear and having a bit of a laugh. John wasn't there, but the engineers were cool. We listened to the playback over a couple of beers and then went off to play a gig somewhere." (Dave Parsons, Punk 77.)

Retrieved from "https://peel.fandom.com/wiki/Sham_69?oldid=224897"
Community content is available under CC-BY-SA unless otherwise noted.