(This page is about Peel's wife, whom he nicknamed The Pig. For the English musician Raymond Watts whose project is of the same name, see Pig(2)). 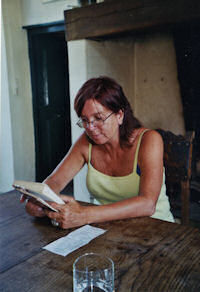 Sheila Mary Ravenscroft (née Gilhooly; born 27 October 1948) is of Irish Catholic descent, and was born in Bradford, Yorkshire. She was married to John Peel from 1974 until his sudden death in 2004. Sheila was training to be a chemistry school teacher when she met him at a BBC television studio in 1968, where he was one of the presenters of a TV show called How It Is. Soon afterwards they began to live together. Peel explains in more detail about how he met her in a BBC interview called Interview: On Meeting Sheila. He also paid tribute to her inflluence on his life on many occasions, for example in an interview in Time Out magazine in 1988:

"I used to have a rather ritzy flat in Harley Street where actresses who didn't act and models who didn't model would come and disport themseves. I used to sit around talking crap and they'd nod and say "wow, that's really groovy". But Sheila, who's from Shipley, would come in and instead of saying "wow, that's really groovy", she'd go "Ee, yer a daft booger!" and I used to think that this was really rather disrespectful, until it dawned on me that she was right. A wonderful woman. I wonder what would have become of me if I'd not met her? Something grim I suspect." (Nick Coleman, "Resounding Peel", Time Out, No. 948, October 19-26 1988; 20th anniversary supplement, pp. 13-14.)

In 1996, whilst at the Isle Of Man TT Races with fellow DJ Andy Kershaw, Peel learned that Sheila had suffered a brain haemorrhage and immediately went back to Peel Acres to visit her at hospital. Although Sheila appeared to have made a complete recovery, John was understandably shaken.[1] The following year, she suffered a relapse for some time in which her eyesight began to deteriorate and she became virtually colour-blind: this led to her being unable to drive. [2]

During their time living at Peel Acres, Sheila decided to be a housewife and often organised trips abroad for young people and took part in the village community's activities (for example, she is a member of the local operatic society) [3]. John also got Sheila involved in his BBC Radio One shows at Peel Acres, especially the Pig's Big 78, where Sheila would announce an old 78 rpm vinyl record before it was played (this segment became so popular among listeners that one suggested she should make it into a roadshow).

Since Peel's death in 2004, Sheila has been involved with the John Peel Centre for Creative Arts in Stowmarket, Suffolk, where there is a place for young people to get involved in theatre, arts and music. She's also involved with the Space project, where they aim to record John Peel's Record Collection on their virtual online museum website. Plus she enjoys choir singing and looking after her grandchildren who take up the rest of her time. [4]

In November 2015 Sheila Ravenscroft took part in the BBC Radio series Inheritance Tracks, in which guests select two pieces of music which are important to them; she chose 'Panis Angelicus' by César Franck and 'You Little Thief' by Feargal Sharkey [5].

In her section of Margrave of the Marshes (p.247), Sheila describes how, when John Walters took over as producer of Top Gear in April 1969, there was a "change of atmosphere". Walters didn't approve of Peel's habit of bringing groups of friends into the studio and threw them all out - but he did allow Sheila to stay, hence the many references to "the Pig" from 1970 on. Peel would also dedicate records to her or play tracks she had suggested ("Pig's Choice").