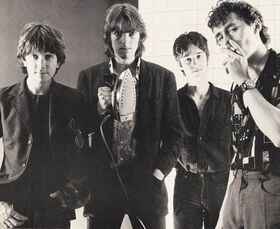 The Soft Boys were a rock band led by Robyn Hitchcock primarily during the 1970s, whose initially old-fashioned music style of psychedelic/folk-rock became part of the neo-psychedelia scene with the release of Underwater Moonlight.

The band broke up in 1980 but briefly re-formed for a UK tour in 1994 and then again in 2001 for the 20th anniversary of Underwater Moonlight and the release of a new album, Nextdoorland in 2002. They disbanded once again in 2003.

Robyn Hitchcock, the frontman of The Soft Boys, was often very vocal about his influences that included a lot of Peel favorites, such as Captain Beefheart, Syd Barrett, The Beatles, Bob Dylan and Roxy Music. Although the DJ followed the band throughout their brief career, playing tracks from both their records as they came out, he later admitted that they weren't one of his favorite bands: on 17 May 1983 he openly stated he was never a fan of them and on 03 February 1989 he added that he found them "clever" in a "knowing" way.

Retrieved from "https://peel.fandom.com/wiki/Soft_Boys?oldid=239768"
Community content is available under CC-BY-SA unless otherwise noted.