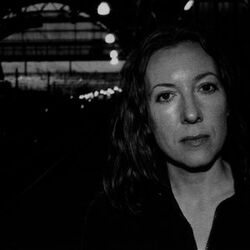 Elisabeth Esselink (born 14 August 1965 in Delft), known by her stage name Solex, is a Dutch solo performing artist based in Amsterdam, Netherlands. Her music is a light-hearted amalgamation of pop music, electronica and sampling. After performing as a member of the Dutch indie group Sonetic Vet, Esselink began the Solex project in order to give herself a more complete and fulfilling musical outlet. The name is taken from the French moped manufacturer Solex. Utilizing the records in her own record store, she assembled her music on an antique 8-track recorder, singing original lyrics over her musical creations. The first album, Solex Vs. the Hitmeister, was cobbled together using samples from albums that Esselink had been unable to sell in her store. Later albums would see her assembling tracks with samples she had secretly recorded at live performances in addition to sampling records from her collection. She has appeared on Gerling's 2001 album Head3cleaner/When Young Terrorists Chase the Sun and the Go!Team's 2007 album Proof of Youth. (Read more at Wikipedia.)

"Let me read you what we’ve got about Solex. Solex is Elizabeth Esselink from Holland, as you probably know by now. She finds source material from what she describes as old vinyl, crappy unsellable CDs, television, Wheel Of Fortune, the better-looking talkshow hosts – they seem to sound better as well – noisy deaf people, films, bootlegs, radio, street noises and animals – and makes it into her own unique records. Her current album, Low Kick And Hard Bop, was released on 10th September. She’s produced two previous albums: Solex Vs. The Hitmeister (1998) and Pick Up (1999). Both of these of course heard quite a bit on these programmes. And she is currently touring the US and will move onto Europe. And she was with us, you’ll recall, a year or so ago when we went to Noorderslag in Groningen, and maybe she will again this year."
(John Peel: 13 November 2001)

"My favorite session was a live show in the studio (2000). We played two sets on air in front of a live audience. Peel, who did the show from the same room, said the audience should get closer to the band and not make it that obvious they were only there for the free beers and snacks. When he aired our final session in 2002, I listened to the live webcast. He said some nice things and I dropped him an email right away. I joked about doing the next sessions at Peel Acres. He read the email on the show and said that the Peel Acres session was a very good idea. Unfortunately that session never happened."
(Elisabeth Esselink (Solex), quoted BBC Peel site)

Five regular sessions, two other live appearances. Session #1 was voted in the Peel Sessions: The Best 125. No known commercial release of any session, although the version of Teenage Kicks in #2 apparently found its way into a privately compiled 60th birthday CD that was presented to Peel, along with a cover of Echo & The Bunnymen's 'The Cutter' (see Other Shows Played section).

Retrieved from "https://peel.fandom.com/wiki/Solex?oldid=258787"
Community content is available under CC-BY-SA unless otherwise noted.