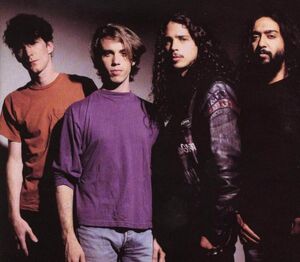 Soundgarden is an American rock band formed in Seattle, Washington in 1984 by singer and rhythm guitarist Chris Cornell, lead guitarist Kim Thayil, and bassist Hiro Yamamoto. Matt Cameron became the band's full-time drummer in 1986, while bassist Ben Shepherd became a permanent replacement for Yamamoto in 1990. Soundgarden was one of the seminal bands in the creation of grunge, a style of alternative rock that developed in Seattle, and was one of a number of grunge bands signed to the record label Sub Pop.

Soundgarden was the first grunge band to sign to a major label (A&M Records, in 1988), though the band did not achieve commercial success until they popularized the genre in the early 1990s with Seattle contemporaries Nirvana, Alice in Chains, and Pearl Jam. Soundgarden achieved its biggest success with the 1994 album Superunknown, which debuted at number one on the American album charts and yielded the Grammy Award-winning singles "Black Hole Sun" and "Spoonman". In 1997, the band broke up due to internal strife over its creative direction. After several years working on projects and other bands, Soundgarden reunited in 2010 and their sixth studio album, King Animal, was released two years later. In 2017, singer Chris Cornell died at the age of 52 after playing a concert with Soundgarden in Detroit.

Peel was a fan of records signed to the Sub Pop label, which Soundgarden was a member of in most of the 80's, including a brief member of SST Records in 1988, before signing to A&M in 1989. However after 1989, he lost interest in the band, when they became more hard rock in their grunge and less alternative, unlike Nirvana who were more alternative with their sounds, which Peel was more interested in.

Retrieved from "https://peel.fandom.com/wiki/Soundgarden?oldid=252812"
Community content is available under CC-BY-SA unless otherwise noted.