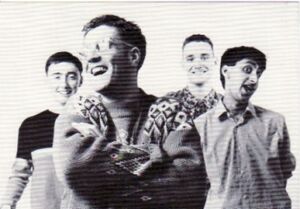 The Soup Dragons were a Scottish alternative rock band of the late 1980s and early 1990s. Named after a character in the 1970s children's television show Clangers, the group is best known for its cover of the Rolling Stones' song "I'm Free". The Soup Dragons formed in Bellshill, a town near Glasgow, in 1985. The line up was Sean Dickson (vocals, lead guitar), Jim McCulloch (guitar, second voice) who replaced Ian Whitehall and Sushil K. Dade (bass). The original drummer, Ross A. Sinclair, left the group after the first proper album, This Is Our Art, to pursue a career in art, and was replaced by Paul Quinn. Most of their songs were written by Dickson, while some were co-written with McCulloch.  The band recorded their first demo tape, You Have Some Too, after playing a few local gigs, and this was followed by a flexi disc single "If You Were the Only Girl in the World". Originally inspired by Buzzcocks and lumped in with the C86 movement, along with fellow members of the Bellshill Sound, such as the BMX Bandits and Teenage Fanclub, they went through a number of stylistic changes in their career, including the indie-dance crossover sounds of the early 90's, where they had their biggest hit I'm Free, reaching number 5 in the UK Singles Chart in 1990. Subsequent albums continued the indie-dance crossover sound. In 1992 they enjoyed their biggest U.S. hit with "Divine Thing" which reached number 35 on the Billboard Hot 100. The Soup Dragons disbanded in 1995. Paul Quinn joined Teenage Fanclub and Sushil K. Dade formed the experimental post rock group Future Pilot A.K.A. Sean Dickson formed High Fidelity and left to deejay as HiFi Sean. Jim McCulloch joined Superstar, wrote and recorded music with Isobel Campbell, and formed the folk group Snowgoose.

Peel discovered the band through the Pure Popcorn magazine in 1985, who had a flexi disc of the band's single "If You Were The Only Girl In The World". As admirers of their Buzzcock sounds, he invited the band for a couple of sessions, which they recorded in early and late 1986. His enthusiasm was also documented in an interview with the group in Smash Hits in October 1986.[1] When the baggy scene became popular with the indie-dance crossover music in the early 90's, Peel didn't play any of the Soup Dragons material. Only after the band split up in 1995 with Sean Dickson forming The High Fidelity and Sushil K.Dade forming Future Pilot AKA, did Peel start playing their new material.

Peel also visited Sean Dickson and met his father in Scotland during the filming of the TV documentary Sounds Of The Suburbs: Lanarkshire, where on the programme, Peel was seen discussing with Sean on his upbringing and Peel's envy of his BBC Radio One colleague Richard Skinner going out with Sheena Easton, for whom he had displayed an undisguised attraction.

Retrieved from "https://peel.fandom.com/wiki/Soup_Dragons?oldid=277106"
Community content is available under CC-BY-SA unless otherwise noted.