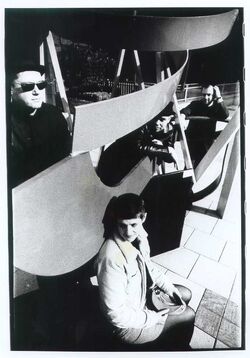 Sportique were a British indie pop super-group, active from around 1997 - 2006. Fronted by Gregory Webster, formerly of Razorcuts, the group also sported the talents of Mark Flunder (Television Personalities) and Rob Pursey (Heavenly, Marine Research). The group was later augmented by the addition of Amelia Fletcher (Talulah Gosh, Marine Research, Heavenly) on keyboards.

(The list below was compiled only from the database of this site and Lorcan's Tracklistings Archive and may be incomplete. Please add further information if known.)

Retrieved from "https://peel.fandom.com/wiki/Sportique?oldid=246024"
Community content is available under CC-BY-SA unless otherwise noted.