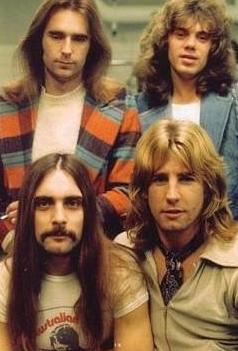 Status Quo are an English rock band whose music is characterized by their distinctive brand of boogie rock.  The group originated in The Spectres, founded in 1962 by schoolboys Francis Rossi and Alan Lancaster.  After a number of lineup changes, the band became The Status Quo in 1967 and Status Quo in 1969. Their drummer from 1982-5 was Pete Kircher (ex-Honeybus), who left after the band's appearance at Live Aid. In 1991, Status Quo received a Brit Award for Outstanding Contribution to Music. The band continues to play music, despite facing criticism of being uncool and lacking air play on BBC Radio One during the 90's and beyond. In 2016, guitarist Rick Parfitt died in hospital after announcing couple of months previously that he would no longer be performing with his band after suffering from a heart attack in the summer of that year.

"It is 1968 or 1969, some year like that, and Gaffer Peel is compere at a rock festival in Nottingham. The organizers expected a crowd of 40.000, got 400, and a poor time is being had by all. Band after band has numbered us with meaningful stuff about the revolution (whatever happened to it anyway?), or bored us with their suite base on 'Alice Through The Looking Glass'. I'm supposed to dart between the two stages to announce each band but I'm busy trying to fascinate a young woman (unsuccessfully, I'm afraid) and this shower get on stage unannounced. "Ello", the below, stirring the stoned handful out of their torpor, 'you're not gonna like us at all, we make hit singles and we're very loud'. They didn't, they do and they are. At the time I was outraged. Who, I asked myself, are these outrageously vulgar yobboes? We wanted beauty and truth, not rowdiness; certain substances, not brown ale. Status Quo played, unabashed and basic, and since then, secretly at first because, I mean, Quo weren't, as we said then, where it was at, I've been a believer. Amazing to think that when they first annoying the neighbours from scout halls and cricket pavilions, John Kennedy was still alive, only a fistful of daft Scousers and Hamburgers had heard of the Beatles, and I was selling crop insurance in West Texas. Even more amazing in this is - thirteen years on, their music is so fresh and vital that wherever you do a disco you know it's going to be a either 'Brown Sugar' or a Quo record that finally get's them moving. You know too, that there's always going to be a row of loonies - Maybe including you - who'll get down into that celebrated Quo boogie stance and churn to and fro like creatures possessed. Status Quo are good lads, they make exciting and unpretentious records, they make me feel positively carefree, have saved many a potentially disastrous gig for me, and if they rock on for another thirteen years - well that's just fine by me.."

Few people in the music media were willing to take Status Quo's change of direction seriously. At the time Pink Floyd and Chicken Shack were the obviously cool bands, and Quo, because of their first pop hits, were still struggling for the recognition they deserved. One breakthrough came when Radio One DJ John Peel saw them perform at a heavy rock festival in Leicester in 1970. "I couldn't get over how cocky they were", he commented later. "They bounded on - in front of about 400 hippies sitting gently on the floor - and shouted out: Right, you're not going to like us, so get ready. Despite myself I have to confess that I found myself liking them. They were loud and abrasive and very exciting. And although I didn't play their first single that year, precisely because of who they were, I did play "In My Chair". By the following year we brought them in for a session on Night Ride

Peel had gone to Dublin in summer 1979 to see an all-day event headlined by the group, and had enjoyed their set [2]. After the 70's, Peel was not keen on their music, which changed in the 80's when the band dropped their boogie rock style. In the 80's and beyond, he rarely played some of their music and if he did, it was always the group's material from the 70's. However, he defended his choice of Down Down for the Peelenium 1974:

"Let me tell you, Status Quo actually recorded three sessions for this programme, and I did play the whole of a Status Quo LP upon its release and interviewed the band as well, so I've got nothing to be ashamed of there." (18 November 1999).

In 2002, the nightclub Fabric wanted Peel to compile a compilation of his favourite songs on their album. Peel suggested a track from Status Quo in their tracklist, and commented in an interview.

"They wouldn’t let me put a Status Quo track on there, they thought that would be too uncool. I was a bit disappointed about that." [3].

After the DJ's death, the band's single Down Down was found amongst his most treasured 45s in John Peel's Record Box. The group appeared on the 2005 Channel 4 documentary devoted to the collection, describing how honoured they were when they found out that Peel kept a copy of their single in his special record box.

Retrieved from "https://peel.fandom.com/wiki/Status_Quo?oldid=250295"
Community content is available under CC-BY-SA unless otherwise noted.