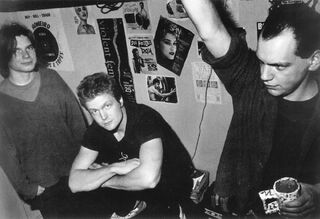 "As stupid a name as any band ever had, in my view...Why couldn't they have called themselves something like the Beatles, or the Rolling Stones, or the Kinks? Steel Pole Bath Tub really is an awful name." [1]

Steel Pole Bath Tub was an American rock band, formed in 1986 in Bozeman, Montana by Mike Morasky (guitar/vocals) and Dale Flattum (bass/vocals). Morasky and Flattum moved the band to Seattle, Washington where Darren Mor-X (drums) joined the band, before they all moved to San Francisco, California.

The band became known for their chaotic, noisy style and frequent use of television and movie samples, with several 7" singles and albums on Boner Records, before being signed to Slash Records and releasing their major label debut in 1995. Their signing to Slash was part of a mid-1990s free-for-all signing bonanza of alternative rock bands, particularly bands from the Northwestern United States in the wake of the surprising commercial success Geffen Records had with Nirvana, many of which ended in creative and ownership conflicts. Steel Pole Bath Tub and Slash's relationship was no different.

The only album they ever released on Slash contained very few samples, which had previously been a staple of the band, at the insistence of Slash's legal department. The band hoped their second album for Slash would be a cover of The Cars (2)' first album in its entirety, but the label would not allow that idea and then deemed the demos the band submitted (which contained three Cars covers) unlistenable and refused to release them.... (Read more)

TrouserPress.com describes them thus: "On the surface of its sound, Steel Pole Bath Tub isn't all that different from a thousand other post-Big Black combos, but a plunge below the clamorous veneer reveals a clever ear for a twisted sample — not to mention a peculiarly pop-savvy way with a guitar hook." [2]

Steel Pole Bath Tub typify the range of grunge acts that JP was playing around the turn of the 1990s: despite his reservations about the name (similar to comments he made about Stitched-Back Foot Airman), he liked their sound enough to support them for five years. On the first play listed below, he said they were a "band to give you sleepless nights, I think." Plays were limited after this initial enthusiasm, however, and he was not attracted to the band's 2002 release Unlistenable, despite the self-deprecating humour inherent in it.

Retrieved from "https://peel.fandom.com/wiki/Steel_Pole_Bath_Tub?oldid=219465"
Community content is available under CC-BY-SA unless otherwise noted.