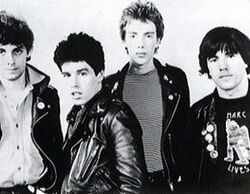 Stiff Little Fingers were formed in Belfast, Northern Ireland in 1977 and took their name from a song on the Vibrators' Pure Mania LP. Originally known as Highway Star, they performed Deep Purple covers, but changed their style to acidic, gritty, fast-paced punk with highly political lyrics. Their career initially lasted only six years: signing to a major label (Chrysalis) diluted their sound and by the time Now Then... came out in 1983, their pop-like leanings had alienated their hardcore fans, and they split, only to reform in 1987. In 1991, they were joined by Bruce Foxton, previously bassist with the Jam. They still record and perform to this date. Guitarist and vocalist Jake Burns is the only member to have remained with the band throughout their entire career.

Their first single, Suspect Device, was packaged in the form of a cassette bomb (causing one record company to accidentally throw it in a bucket of water, thinking it was real). It was locally released on the Rigid Digits label (this being a wordplay on their name) and Peel was sent a copy, playing it repeatedly (he included it in his list of records he wanted played at his 40th birthday party, 29 August 1979, and in later years, he would state that it had the best song ending of all). It was analogous to his heavy rotation of Teenage Kicks, although SLF and the Undertones were frequently at loggerheads. This led to a first session, privately recorded at a small studio at Downtown Radio in Belfast and broadcast on 13 April 1978: the band would record five in all. This exposure gained them a distribution deal with Rough Trade (eventually: JP publicly stated his disappointment at the record industry's lackadaisical approach in signing SLF) and their first LP, Inflammable Material, came out in 1979. It

contained a heavy bias toward lyrics based on the Troubles, such as Alternative Ulster (the second single), Barbed Wire Love, a re-recorded version of Device, and Johnny Was (a Bob Marley cover which John did not warm to but was a Festive Fifty favourite).

Peel's consistent championship of the group, which would continue right up to their last recordings in their initial incarnation, no doubt helped them to have a small measure of chart success: two frequently played singles hit the charts in the UK in 1980 (At The Edge got to number 15, and Nobody's Hero / Tin Soldier scraped the top 40, earning the band appearances on Top Of The Pops, and a ban from playing again when they refused to mime properly to their biggest hit). They racked up a sizeable number of Festive Fifty entries, albeit with the same four songs, and John would occasionally return to his favourite, Suspect Device, in later years.

(This list was compiled only from the database of this site and Lorcan's Tracklistings Archive and is almost certainly incomplete. Please add more details if known.)