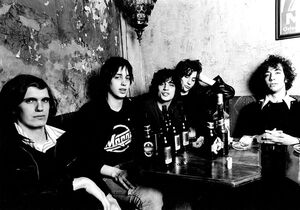 The Strokes are an American garage rock band formed in New York City in 1998, consisting of Julian Casablancas (lead vocals), Nick Valensi (guitar, backing vocals), Albert Hammond, Jr. (guitar, backing vocals), Nikolai Fraiture (bass guitar) and Fabrizio Moretti (drums, percussion). Upon the release of their debut album Is This It in 2001, the group met wide critical acclaim.Since then, the band has maintained a fan base in New York City and elsewhere in the United States, the United Kingdom, Argentina, Ireland, Canada, France, Brazil and Australia. A number of members have embarked on a variety of side projects, though they regrouped for a fifth album, titled Comedown Machine, released on March 26, 2013. They have sold over 5 million albums. They are one of the many indie rock bands to hail from the US at the dawn of the 21st century and helped augment the garage rock revival movement.

Peel heard the Strokes in 2001 and after their first session hoped that this would be the first of many. In fact it turned out to be the band's only session. Peel mistakenly thought their track 'Someday' was 'Somerday'. When Peel first played the group's song 'Barely Legal' on 18 January 2001, he commented that this reminded him strongly of the work of another artist. Despite listeners' suggestions over the course of several weeks (eg 'Flowers In The Rain' by The Move), it seems that he never identified the track he was searching for.

Retrieved from "https://peel.fandom.com/wiki/Strokes?oldid=229100"
Community content is available under CC-BY-SA unless otherwise noted.