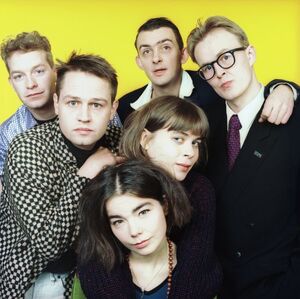 The Sugarcubes (Sykurmolarnir in Icelandic) were an Icelandic alternative rock band formed in 1986 and disbanded in 1992. The members of The Sugarcubes had formerly been in a variety of Icelandic bands. Björk had the longest career out of any of the members—she had recorded an album as early as 11 years old, and in her late teens, she joined the Icelandic post-punk band Tappi Tikarrass, who released two albums before splitting in 1983. Drummer Siggi (Sigtryggur) Baldursson was a member of þeyr, and Einar Örn Benediktsson and Bragi Olafsson formed a punk band called Purrkur Pillnikk. By 1984, Björk, Einar Örn, and Siggi had formed the supergroup Kukl with keyboardist Einar Melax, and released several singles on the independent British record label Crass.

Peel played some of the members early bands such as þeyr and Purrkur Pillnikk early in 1982. However when the Sugarcubes were formed in 1986 and they released the single "Birthday" in 1987, Peel immediately enjoyed the track and played it often on his shows, which ultimately reached number 1 in the 1987 Festive Fifty. He also played other tracks from them between 1987 and 1988. However he was not happy with their second album released in 1989 and did not play any tracks from that album.  He also wasn't a fan of Björk's solo career and once described her as very broody on 08 June 1988:

"... And the band come from Iceland just like the Sugarcubes, actually who were in the building, some of them anyway a week ago or so. And the two blokes were aimable, but Bjork seemed rather those things, just came over, shook hands and went and stood at the far corner of a rather large room staring moodily at the wall, which I thought was, well, I didn't expect her to say yo! homeboy and pinch me on the bum, but at the same time, it seemed a bit kind of calculated broody or brooding."

The list below was compiled only from the database of this site and may be incomplete. Please add further details if known.

Retrieved from "https://peel.fandom.com/wiki/Sugarcubes?oldid=224313"
Community content is available under CC-BY-SA unless otherwise noted.