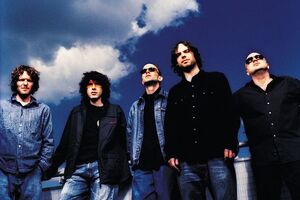 The band's early releases were in Welsh, which is probably what attracted Peel to their material: he gave them airplay as early as 1995, followed by their first session the next year. Their last for the show was live from Maida Vale, and John voiced the audience's surprise (and undoubted disappointment) at how low-key and moody it was. Despite their five-session tally, only one song has seen a commercial release.

The Animals never normally missed their national team's football matches, but missed the Wales v. Azerbaijan World Cup qualifier on October 12 2005 (which Wales won 2-0) in order to play a Peel tribute show in London [1]. Rhys explained that they chose songs that reminded them of John, in particular 'Zoom', which they wrote on the way to Peel Acres to do the 2001 live session, and 'Run Christian Run' due to it featuring a pedal steel.