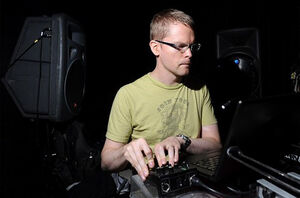 Surgeon is the pseudonym of Anthony Child (born 1 May 1971), an English electronic musician and DJ. Child releases music on his own labels Counterbalance and Dynamic Tension. Established imprints, such as Tresor, Soma, and Harthouse, have also released Surgeon's original material and remixes. He has also been recognized as one of the first wave of DJs to use Ableton Live and Final Scratch to supplement his DJ sets.

Child grew up in Kislingbury, a village in Northamptonshire, England. In 1989, he moved to Birmingham to study audio-visual design, played in a jazz/rock/fusion band called Blim, and learned to DJ from friend Paul Damage. At that time, there were no Techno clubs in Birmingham so he and his friends started House of God, and by 1992 he was DJing there regularly. In 1994, he released his eponymous debut EP on Downwards Records. Surgeon's musical style is characterised by his incorporation of the more cinematic and left field aspects of his musical background into his club-based material. His production, remix, and DJ repertoire are inspired by krautrock and industrial music bands such as Faust, Coil, and Whitehouse....(Read more)

It appears John began featuring Surgeon's music from 1995 onwards: two sessions followed at the tail end of the decade (after the second, JP claims Surgeon is going to return to play a more experimental set) and two live performances thereafter. The debut release was apparently encouraged by Mick Harris of Napalm Death, who locked Child in a studio and told him to "go mad" (Child was a fan of Harris' post-Napalm project Scorn (2)). Oddly, Surgeon's biography on his website makes no mention of his involvement with Peel. However, he was more forthcoming in interviews, claiming that Peel introduced him to dubstep:

"When this dubstep stuff came along it was exciting because it was at a techno tempo. I remember Karl and I getting really excited hearing John Peel play some really early dubstep stuff. We were like, "Wow, what's this?" John Peel, yet again championing new, new exciting forms of music." [1]

"Pre-internet, the way I discovered almost all music was going round to a friend's house and them playing me some crazy music and introducing stuff to me. Or someone like John Peel doing that." [2]

Retrieved from "https://peel.fandom.com/wiki/Surgeon?oldid=247506"
Community content is available under CC-BY-SA unless otherwise noted.