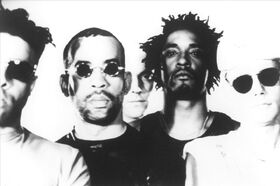 Tackhead (styled TACK>>HEAD, sometimes known as Fats Comet) are an industrial hip-hop group that were most active during the 1980s and early 1990s. The core members are Doug Wimbish (bass), Keith LeBlanc (percussion) and Skip McDonald (guitar) and producer (sometimes credited as "mixologist") Adrian Sherwood. In the late 1970s, Wimbish, LeBlanc and McDonald were members of the house band for the Sugarhill Records record label. Soon after British producer Sherwood met LeBlanc during a visit to New York in the mid-80s, the trio of Wimbish, LeBlanc and McDonald relocated to London and began working on tracks for Sherwood's On-U Sound record label.

Collaborations included taking over band duties in "Mark Stewart and the Maffia," with former Pop Group member Stewart on vocals, for three LPs between 1985 and 1990. Another tie-up was with the On-U sound system touring MC as "Gary Clail's Tackhead Sound System," leading to a 1987 LP, Tackhead Tape Time. LeBlanc also released two solo LPs that both featured all Tackhead members. On the first Tackhead LP proper, Friendly As A Hand Grenade (1989), vocalist Bernard Fowler joined the line-up and many older instrumental tracks re-appeared with lyrics. The follow-up album, 1990's Strange Things (the first on a major label, EMI), was not as well received by critics.

Despite not releasing any further material as Tackhead until 2010, group members continued to record as the backing band or with various Sherwood-led On-U Sound productions artists such as Gary Clail's solo efforts, African Head Charge, Dub Syndicate, New Age Steppers and others. Subsets of the group have also appeared in various guises, including Strange Parcels, Barmy Army and the blues-oriented Little Axe.

Peel was a long-time fan of Tackhead member Adrian Sherwood's work as a producer. The DJ had also played hip-hop releases featuring US musicians Doug Wimbish, Keith LeBlanc and Skip McDonald as part of the Sugarhill house band, as well as drummer LeBlanc's Malcolm X single 'No Sell Out,' which featured vocal samples of the American black activist. In 1984, Peel aired Sherwood’s early collaboration with LeBlanc on the one-off Enemy Within miners’ benefit 12”, built around vocal samples of UK miners' leader Arthur Scargill.

The producer’s subsequent work with Tackhead coincided with a shift by Sherwood to a harsher industrial sound in a period when he worked less frequently in the reggae field, following the 1983 death of mentor Prince Far I, with Tackhead's trio of American musicians quickly becoming involved in a wide range of On-U Sound projects. In a 1988 Observer article, Peel suggested that “tracks made with singer Mark Stewart [with Tackhead musicians as "The Maffia"] have been especially disconcerting”.[1]

In a 2016 interview, Sherwood recalled Peel giving airtime to the second Tackhead single, 'Mind At The End Of The Tether' (1985), which featured apocalyptic readings from HG Wells:

"I can remember John Peel playing it on the radio — the most interesting radio show in England at the time — and he was just blown away by it."[1]

On a lighter note, the DJ was also hugely enthusiastic about the producer’s football-centered Barmy Army side project, describing the ‘Sharp As A Needle’ single as “the only football record of merit yet released”.[2] It is not currently known whether Peel played the earlier and similarly themed Tackhead single ‘The Game (You'll Never Walk Alone)’ [2], but both Doug Wimbish and Skip McDonald from the band appeared on the Barmy Army LP. [3]

As well as regular Tackhead releases, Peel also played recordings put out under the name Fats Comet and Keith LeBlanc solo material featuring all members of the band, plus tracks by later groupings based on Tackhead personnel, including Strange Parcels and Little Axe.

In 2012, the ‘Tackhead Tape Time’ and ‘Friendly As A Hand Grenade’ LPs were among the first 100 albums by artists beginning with T when details of Peel’s record collection were initially released via TheSpace website. (See Record Collection: T.)

The Maffia (with Mark Stewart)