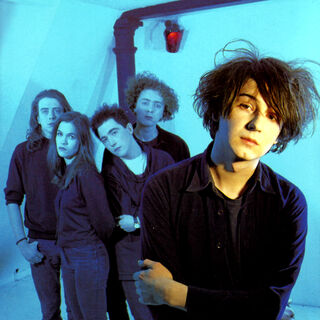 "It's curious how last year they were terrifically hip and now suddenly not so hip at all, really. I think it was the Reading Festival, they somehow got it wrong at the Reading Festival: I was standing on stage watching them, they weren't terribly good but there was more to it than that somehow." [1]

The Telescopes are an English noise, space rock, dream pop and psychedelic band, formed in Burton Upon Trent in 1987 by Stephen Lawrie, and drawing influence from artists such as Suicide, The Velvet Underground and The 13th Floor Elevators. They have a total of ten released albums including their debut, Taste, released in 1989.

The Telescopes recorded two sessions and gained a Festive Fifty entry in 1989.The band's Third Wave LP excited Peel, who said he was both "amazed and glad they were still practising their mysterious art": consequently, he championed it and listed it in September 2002 (Peel's Record Box).

Retrieved from "https://peel.fandom.com/wiki/Telescopes?oldid=238498"
Community content is available under CC-BY-SA unless otherwise noted.