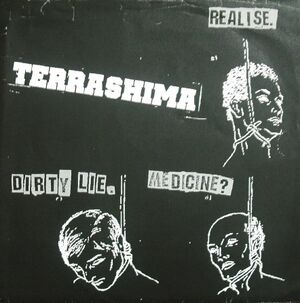 Terrashima were formed in Derby in 2000 from the ashes of Psychotic Reaction, a 60s psychedelic / garage-influenced band more famous for their clothing than their music. [Ryan DelGaudio guitar) and Mike Cross (bass) left Psychotic Reaction to form Terrashima along with Mark Ibbotson (vocals) and Andy (drums), the latter of whom left in 2001 to pursue a career in business, and was replaced by Dan Montague. The band were named after the MC5's recording studio, and were inspired by the likes of that band, Jesus Lizard, Iggy Pop and The Stooges, Mudhoney, Sonic Youth and Scratch Acid. They were famous for the manic and chaotic nature of their live shows which led to the Forced Exposure website describing them as "England's most fucked up rock band" [1]. Whilst the Soundsxp Alternative Music webzine described them as "a full-on sonic assault... (who) play at bowel weakening volume songs that are visceral, guttural and traumatic" [2], this description continues with Ged the reviewer stating how "the punk ethos extends to drop-kicking each on stage, wielding the mike stand like an athlete's hammer and the guitar like a cleaver then stomping off, while for the next 18 hours my ears rang with Terrashima tinnitus". Their on-stage antics including arguing with the crowd, the singer playing a show when supporting Mclusky with a carrier bag over his head, and then also during one of the shows at the London Camden Dingwells venue 15 separate witnesses claiming they saw Jesus moshing in the front row.

Terrashima played at the London ICA where they destroyed all their instruments and caused mayhem and headlined Sean McLusky's Future Rock n Roll tour with The Martini Henry Rifles, causing more destruction throughout the UK. They were banned from most places and on the first night of their tour with Raging Speedhorn and ill niño they were kicked off the tour before it even started for getting into a fight with the headlining bands and causing more headaches for their then manager David Bianchi, who later decided that the band was unmanageable and decided to drop them. During a support slot with The Cooper Temple Clause in Leicester] in 2002, Mark took a dislike to that band's members, and thought it would be comedic to put a half full fizzy can of Stella Artois inside the guitarist's electric acoustic so he got a shock when he switched it on.

Terrashima released a single, 'Losing My Grip' on Blast First Records in 2002 with the song 'Screamer' as the b-side. The NME gave it 8/10 and gave it a glowing review. The Sickroom Gramophonic Collective in the same year in a blatant attempt to jump on the perceived bandwagon belately released a 7" vinyl only single limited to 300 copies of 'Dirty Lie' which featured 'Medicine?' and 'Realise' as its b-sides. Due to problems within the band, their short turbulent career led to the band sacking their lead singer Mark and they went on as a 3-piece with Ryan singing / playing guitar and recorded an album for the Artrocker label. For reasons unknown the album was never released. A 3-track demo version of the LP was reviewed by the Drowned In Sound website and received positive reviews with the reviewer Kate Price stating that"Terrashima have created the perfect soundtrack to trashing your house and setting your dog on fire". Despite it never being released videos for two of the songs from this demo LP ('Headfuck' and 'Beef' ) have since appeared on the YouTube website, these videos were created by Confined Space.

After Terrashima Ryan, Mike and Dan went on to form The Swarm along with Callum Thompson (vocals), Olly Toogood (noises & black boxes) and Scott Sandham (visuals and projections). The Swarm described their sound on their myspace page (http://www.myspace.com/intotheswarm) as "a fierce and passionately dark arrangement, that leaps from visceral sonic intensity to a stripped down, brooding massacre". They had just one release the Fight Me Records 2005 LP 'Red Paint On The Odessa Steps' The LP received positive reviews such as from the Diskant website whose reviewer Stuart Fowkes summed up the LP as "nasty stuff then, but excellent with it".

Currently Ryan is now enjoying success as singer/guitarist/songwriter with psychedelic audio surrealists 'The Cult Of Dom Keller', with whom he has released two albums. toured the US and Europe and in 2015 will be recording the CODK's third album as well as playing various festivals throughout UK regularly. Mike and Dan have retired from music and Dan's whereabouts are unknown.

Retrieved from "https://peel.fandom.com/wiki/Terrashima?oldid=238753"
Community content is available under CC-BY-SA unless otherwise noted.