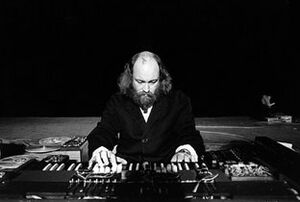 Terrence Mitchell Riley (born June 24, 1935) aka Terry Riley, is an American composer and performing musician associated with the minimalist school of Western art music, of which he was a pioneer. His work is deeply influenced by both jazz and Indian classical music, and has utilised innovative tape music techniques and delay systems. He is best known for works such as his 1964 composition In C and 1969 album A Rainbow in Curved Air, both considered landmarks of minimalist music.

In New York City in the mid-1960s Riley played with his longtime friend La Monte Young, as well as with John Cale and tabla player Angus MacLise, who were founding members of The Velvet Underground. Riley is credited as inspiring Cale's keyboard part on Lou Reed's composition "All Tomorrow's Parties", which was sung by German actress Nico and included on the album The Velvet Underground and Nico, recorded in 1966.

Riley's music is usually based on improvising through a series of modal figures of different lengths. Works such as In C and the Keyboard Studies demonstrate this technique. His famous overdubbed electronic album A Rainbow in Curved Air (recorded 1968, released 1969) inspired many later developments in electronic music. These include Pete Townshend's organ parts on The Who's "Won't Get Fooled Again" and "Baba O'Riley", the latter named in tribute to Riley as well as to Meher Baba. Charles Hazlewood, in his BBC documentary on Minimalism (Part 1) suggests that the album 'Tubular Bells' by Mike Oldfield was also inspired by Riley's example. The band Curved Air took their name from this composition.

Riley continues to perform live, and was part of the All Tomorrow's Parties festival in May 2011....Read more

Two plays have so far been identified for Riley: a short extract of In C and A Rainbow In Curved Air, both far too long to be played in full but both would have appealed to the hippy in JP, with their long and gradually evolving lines appearing to satisfy his love of repetition. John commented on In C: "A very strange record it is too: I wish I could play you the entire 24 minutes or so of it, but obviously I can't, so this is a little bit of it anyway."

A Rainbow In Curved Air became a hippy favourite; as well as inspiring the name of the short-lived but successful band Curved Air, it picked up airplay on underground radio stations, including Radio Geronimo[1], one of whose DJs was a former colleague of JP at Disc and Music Echo, Hugh Nolan[2]. Geronimo broadcast all-night shows from Radio Monte Carlo at weekends during 1970, with eclectic playlists comparable to Peel's shows of the time, from mainstream rock to avant-garde jazz, Chinese classical music - and Terry Riley. In the same year, Riley's "Keyboard Studies" was performed at the Proms, on the same evening when Soft Machine became the first "pop group" to appear at the festival.[3]

In later years, Peel saw similarities between the music of Riley and the work of Tangerine Dream, one of his favourites in the early 1970s. In an article on ‘Kosmische Music’ in the Listener on 1973-04-12 (later republished in The Olivetti Chronicles), he commented:

"A Tangerine Dream track, heard superficially, is little more than a repetitive drone. Closer listening reveals a constantly shifting and evolving pattern – something like Terry Riley’s ‘In C’."