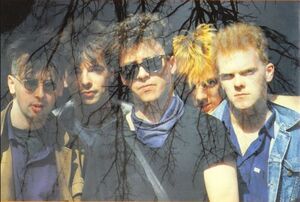 That Petrol Emotion were a Northern Ireland indie band formed in 1984 from the ashes of Bam Bam And The Calling and the Undertones. It was formed by guitarist John O'Neill and second guitarist Raymond Gorman who DJ'd together at the Derry Left Bank club. Drummer and friend Ciaran McLaughlin joined next after having relocated from Derry to London, followed by John's brother and Undertones lead guitarist Damian O'Neill who played bass from 1985 until 1988 upon John's departure. He then took up guitar duties from 1988–1994 and 2008–present. Charismatic American singer Steve Mack, who was on a year out working in a pizzeria in London at the time, finished off the line up. Following John O'Neill's departure, his brother Damian switched to the guitar, leaving bass duties to John Marchini (1988–1991) then Brendan Kelly (1991–1994 and 2008–present). That Petrol Emotion's influences encompassed artists as diverse as The Beatles, Afrika Bambaataa, Television, Sly & the Family Stone, Captain Beefheart and Can. The band split in 1994 and reformed briefly between 2008 and 2010.

As a fan of the Undertones, Peel was interested in the band members projects after the group split in 1983. The brothers John and Damian O'Neill of the Undertones later joined That Petrol Emotion and Peel heard their material, which he later invited the band to do three sessions for his show. The group were regularly played on Peel's show in the mid-late 80's and early 90's.