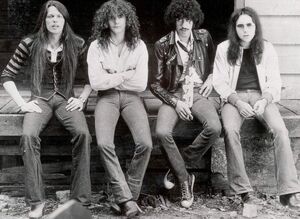 Thin Lizzy are an Irish hard rock band formed in Dublin in 1969. Two of the founding members, drummer Brian Downey and bass guitarist/vocalist Phil Lynott, met while still in school. Lynott assumed the role of frontman and led them throughout their recording career of twelve studio albums until the band split in 1984. Thin Lizzy are best known for their songs "Whiskey in the Jar", "Jailbreak" and "The Boys Are Back in Town", all major international hits still played regularly on hard rock and classic rock radio stations. After Lynott's death in 1986, various incarnations of the band have emerged over the years based initially around guitarists Scott Gorham and John Sykes, though Sykes left the band in 2009. Gorham later continued with a new line-up including Downey. Lynott, Thin Lizzy's de facto leader, was composer or co-composer of almost all of the band's songs, and the first black Irishman to achieve commercial success in the field of hard rock music. As well as being multiracial, the band drew their members not only from both sides of the Irish border but also from both the Catholic and Protestant communities during The Troubles. Their music reflects a wide range of influences, including blues, soul music, psychedelic rock, and traditional Irish folk music, but is generally classified as hard rock.

Peel seemed to discover the band in 1971, when he met Phil Lynott and the rest of the band on a ferry between Dun Laoghaire and Holyhead, before the upcoming release of their first record. On the sleevenotes Peel wrote for Thin Lizzy's first Peel Session release, he mentioned:

"The story of my first meeting with Phil Lynott and the boys aboard a ferry, salt caked smokestacks and the rest, between Dun Laoghaire and Holyhead, has been told too many times already. Suffice to say, Thin Lizzy were crossing to England for the first time aboard the same boat as myself, made contact and urged me to listen out for them. ... Throughout the first half of the seventies, they provided a welcome antidote to much of the pretentious hogwash that bedevilled the age ..."

The band did eleven sessions for Peel's show and Peel himself invited Phil Lynott to the studio to discuss the band's 'Live And Dangerous' double album and Lynott's solo album on the 29 May 1978 show. After the end of the 70's, Peel seemed to lose interest in the band, although he played Whiskey In A Jar as a Peelenium 1973 choice on 17 November 1999.

On 14 April 1999, he played a track from the band's sessions album, at the request of Tim from Ash, and admitted:

"I did loads of gigs with Thin Lizzy around the time of these things (the band's Peel sessions) but don't remember a great deal about them. I would love to have millions of amusing anecdotes, you know, about things that we got up, but frankly I would have to make them up, to be honest."

Retrieved from "https://peel.fandom.com/wiki/Thin_Lizzy?oldid=252358"
Community content is available under CC-BY-SA unless otherwise noted.