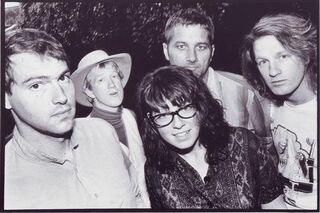 The band achieved their greatest critical and commercial success in the mid-nineties when they signed with the influential indie rock label Matador Records. It was during this time that Thinking Fellers produced their most prominent albums, Lovelyville, and the critically lauded college radio hit Strangers from the Universe. They toured the Netherlands, Germany, Switzerland and the U.K. in 1994. In 1996 they toured briefly as an opening act for the then-popular band Live but were not received well by the Live fanbase. Thinking Fellers has been largely dormant since 1996, having toured sporadically and released only one full album, Bob Dinners And Larry Noodles Present Tubby Turdner's Celebrity Avalanche, since. (From Wikipedia)

Peel was a comparative latecomer to TFUL282's music. Their first LP Wormed, By Leonard (inspired by Leonard Nimoy) appeared on Thwart Productions in 1988, but there are no recorded plays of their material until tracks from their second LP Tangle, released the following year, were played in early 1990. JP commented, "It's always nice to hear a band whose influences aren't immediately apparent." The band's quirky sense of humour extended beyond their name: John noted, "I quite often, you know, when I am picking a track to play from an LP, I’ll pick one that has a title that kind of amuses me. There was one I played last night which was something about a hummingbird locked in a block of ice or something, from a new LP by Thinking – what’s it called, Thinking Fellers Union Local 282. And, you know, I shall play other tracks from it, but that’s the one that I played first – because I liked the title as well." [1]

Kat's Karavan took the opportunity to book them for a session when they toured Europe during 1994, which obviously met with John's approval: after the first track aired, he stated, "Just exactly what the doctor ordered, at least as far as your little fat friend is concerned," but it was neither repeated nor released commercially. Moreover, John's unstinting promotion of their sound (including playing three tracks from Mother Of All Saints back to back) failed to garner any Festive Fifty entries.

Retrieved from "https://peel.fandom.com/wiki/Thinking_Fellers_Union_Local_282?oldid=239964"
Community content is available under CC-BY-SA unless otherwise noted.