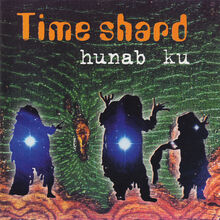 Time Shard were one of the innovators in underground UK electronic dance music during the 'second summer of love' in 1989. During their first five years Gobber, Psi and Steven Angstrom became known as one of the UK's first live 'acid house' acts, during this time they developed a sound which (later) became known as Psychedelic trance although at the time they were often described as producing Ambient or Shamanic Trance music.

Their early music was a synthesis of dub with the pulsating sounds of Kraftwerk and on slower pieces the influence of Brian Eno is in evidence. Their signature sound of analogue synthesizers, sequencers and drum machines overlaid with glissando guitars and an electric sitar player became popular as music magazine publishers struggled to deal with the new rift between rock and roll and the burgeoning house music.

Their initial successes were on the UK's free - festival circuit, which was in a period of transition and fusion as acid house fans found a place to dance (initially) without restriction, outside mainstream club culture, which had yet to develop the 'superclubs' such as Cream.

Based in Liverpool, Timeshard were primarily known as a live band and had a relatively short recording career in the mid-1990s, with releases on the Planet Dog label, also home to fellow Peel session outfits Eat Static and Banco De Gaia. Peel played tracks from both their albums.

The band had one session, with Peel later repeating a single track, played from the Planet Dog sessions compilation on Strange Fruit.