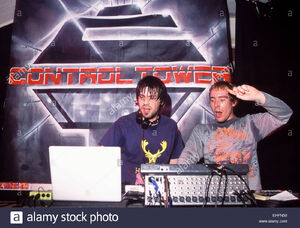 Tokyo Windbag are a UK electro-noise band: members are Chris Mackin and Subway Lung (also know as merely Lung on solo releases). They released the 7 inch 'Subway Lung/Gak - Klot' on the Control Tower label in late 2002 (in a limited release with a hand-sprayed sleeve), and contributed four tracks to a split 12" with Percy X on the Firewire label two years later.

The single was selected by Peel for the November 2002 (Peel's Record Box): he tended to prefer the B-side, as was so often the case. On its first play, he described the track as "deeply strange". He speculated (erroneously) that they might be from Japan.

Retrieved from "https://peel.fandom.com/wiki/Tokyo_Windbag?oldid=231421"
Community content is available under CC-BY-SA unless otherwise noted.